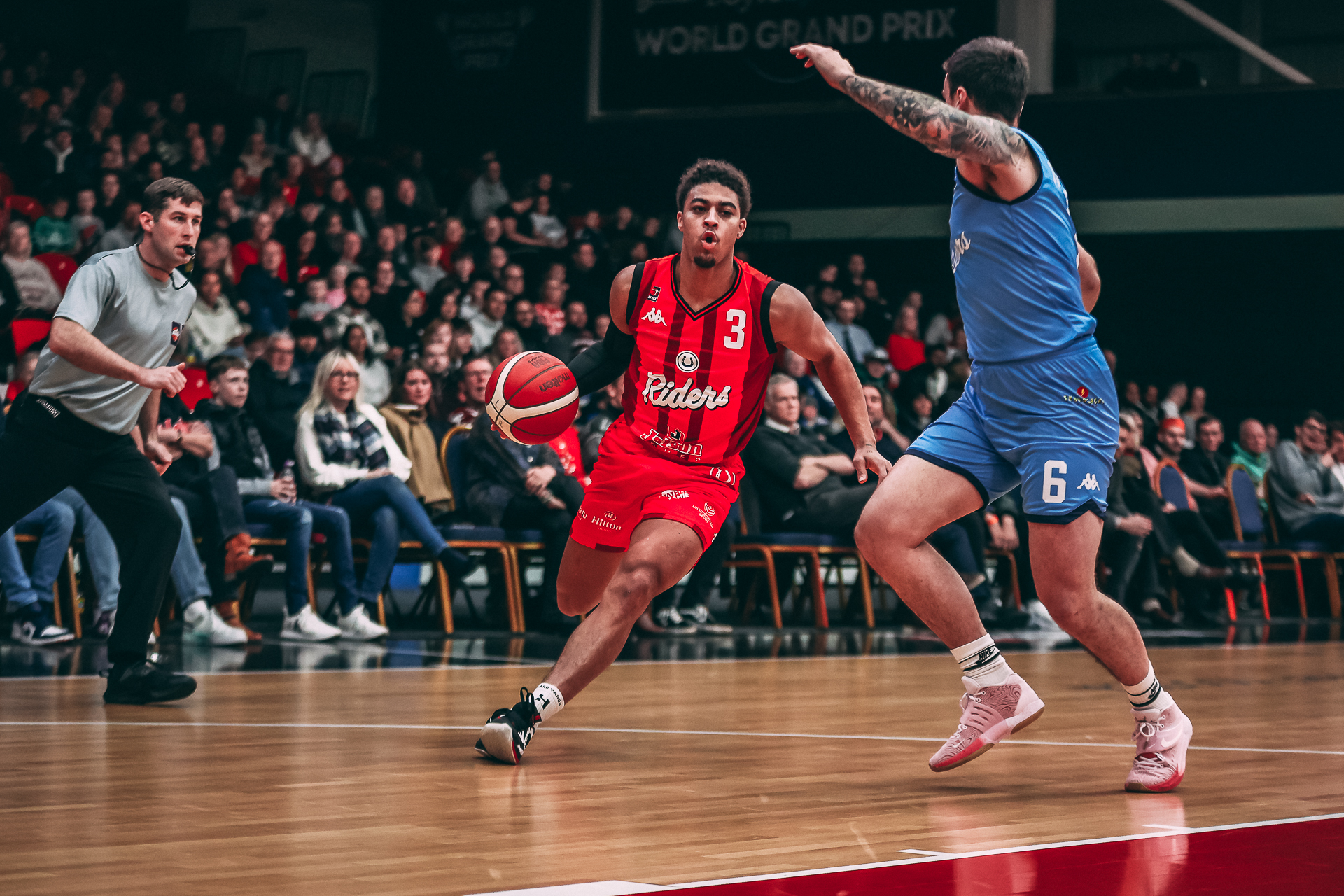 The Riders are gearing up for BBL Championship action, heading to the North East to take on the Newcastle Eagles! They look to make it nine wins out of their last 10, to improve their league record to 10-4.

Riders on the road

This game will be Leicester’s ninth away fixture of the year. They’ve won 50% of these games, positioning them third in the BBL Championship standings after a recent run of good form.

A win in this one would make it four on the bounce in all competitions, with the Riders’ offence executing with elite efficiency on this winning streak.

They lead the BBL in field goal, three-point and free-throw percentage, their offence producing the second most points in the league.

Their shooting form was on full display in their previous game, as they scored 100 points against the Caledonia Gladiators. Leicester shot 57.6% from the field and 42.1% from three, led by Patrick Whelan’s emphatic 25 points and 10 rebounds.

The Riders last faced the Eagles in the BBL Cup quarter-final, booking their spot in the semis with a 94-75 win. Marc Loving’s 27 points led the team to the next round, where they will take on the Caledonia Gladiators on December 21.

Loving went 10-12 from the floor and 5-5 from three, and will hope for another elite performance in this fixture!

Facing their historic rivals is a golden opportunity for the Eagles to get their season on track after a 2-9 start. They enter the game on a four-game winless streak but will take encouragement from their previous fixture.

It was a closely fought encounter against a talented Caledonia Gladiators team, resulting in an 81-77 loss. The Eagles were up double digits with 7:30 on the clock, but the Gladiators finished strong to secure the win.

Newcastle was led by Darius Defoe, the most decorated player in BBL history with 27 trophies to his name, who scored 20 points in the tie. The 15-year Eagle rolled back the clock in a vintage performance, as the big man dominated inside to make 66% of his shots.

The Eagles can take confidence from their ball-sharing ability, as they average the third most assists in the BBL this season. They’ll aim to display their best brand of team basketball to secure a win from the reigning league champions.

GB international Patrick Whelan is leading the Riders in scoring for the second straight season, putting up 15.9 points per game on a red-hot 49.3% from deep.

The Warrington-born shooting guard was named to the Molten BBL Team of the Year last season and has continued his form into his second Riders year. His 25 points in his previous game was a season-high points tally, earning him a place in the BBL ALL-Star Five last week.

“Pat’s a great player. When he lines up a three-point shot I think it’s going down, and more importantly, he thinks it’s going down,” said coach Rob Paternostro after the game.

“He’s a confident player who’s a team-first guy, and he does a lot of little things. His teammates did a great job of finding him tonight.”

Facing up against him in the backcourt is Newcastle’s leading scorer on the season, Javion Hamlet. The American guard is scoring 19.2 points per game for the Eagles this season and is the fourth-highest scorer in the BBL.

The former North Texas Mean Green was a two-star recruit coming out of high school but proved all doubters wrong in his college career when he put up 15 points per game as a sophomore. He is an automatic scorer at all three levels and will look for a big scoring night against the Riders.

Hamlet went off for a season-high 31 points against the Plymouth City Patriots in October and has scored over 25 points on three other occasions this season.

The 24-year-old can go off for huge numbers on any given night, so Whelan and the Riders will have to bring their best defensive effort against him to slow him down.

Tip-off is at 7:30, and will be streamed live on the British Basketball Youtube channel! Coverage begins 15 minutes before tip-off.