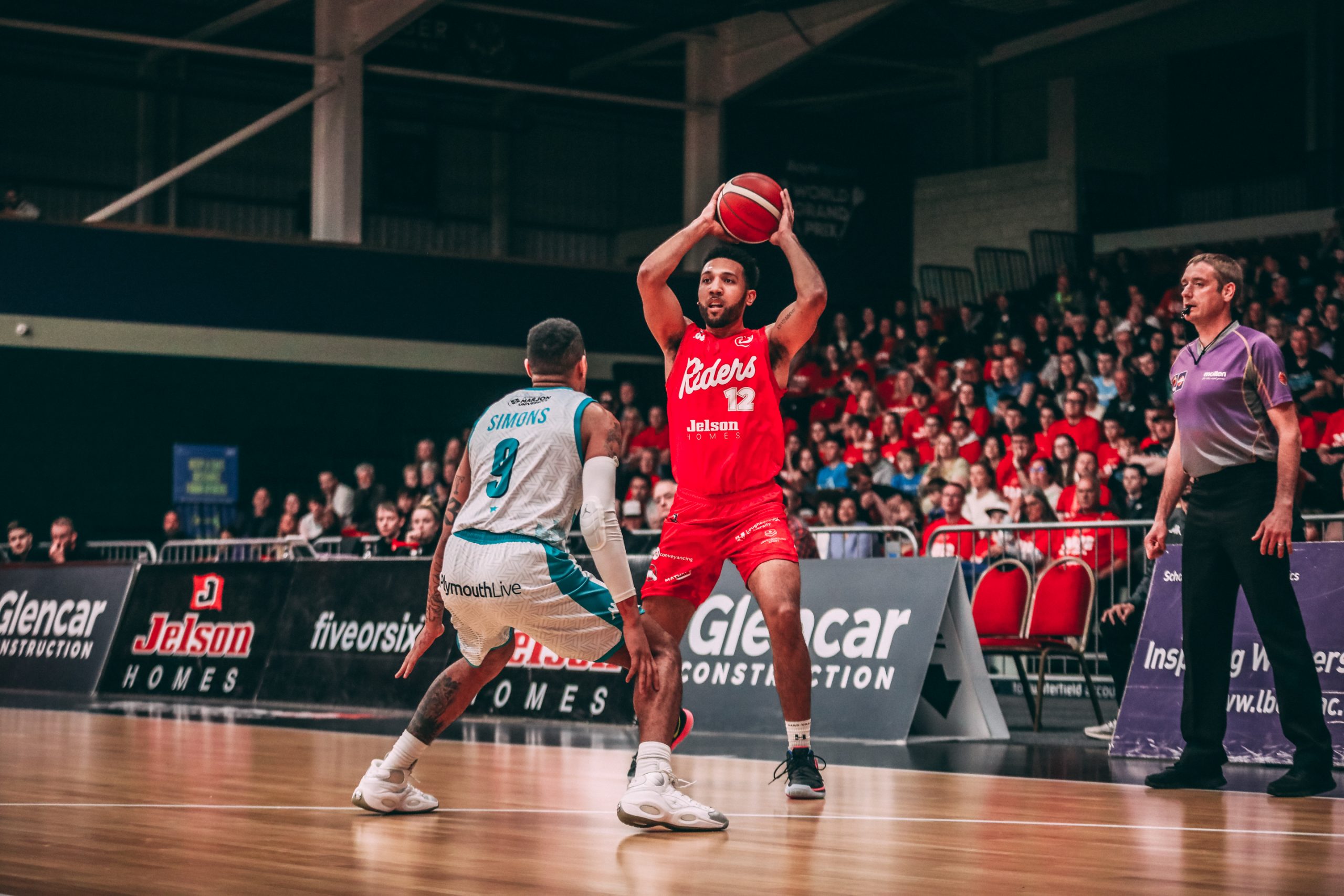 Riders through to the Playoff semi-finals!

The Riders booked their place in the BBL Playoff semi-finals, beating the Plymouth City Patriots over two legs. A 88-87 win in the second leg built on the 15 point advantage they’d built in the first, a solid showing over 80 minutes.

Zach Jackson led the team with 18 points, the Kansas born wing scored 12 in the third quarter after Plymouth took an aggregate lead. Jackson was backed up by 17 from Patrick Whelan and 14 from Geno Crandall, a team showing sealing a hard-fought win.

Leicester got their offence going at the line, driving to the rim to shoot 33 foul shots. They made 88%, and drained 38% of their threes to see them past the Patriots. The win makes it 7-0 in the season series and improves the Riders’ win streak against Plymouth to 38, a run dating back to 2012.

Plymouth had two 20 point performers in the game, with Antonio Williams and Rowell Graham-Bell scoring 25 and 24 respectively. The visitors had a solid scoring night, shooting 51% from the floor, but ultimately fell short against the league champions.

As they did in the first leg, the Patriots got off to the better start, jumping out to a 14-2 lead in the opening minutes. Their big man tandem of Graham-Bell and Rashad Hassan scored eight points between them on the run, forcing an early Riders comeback.

On the defensive end, a chase-down block by Marc Loving denied Patriots’ sniper Josh Hart at the rim, before a strong finish from Mo Walker inside brought the game to within a score. Walker led the Riders through the first with seven points off the bench.

After falling in an early hole, Leicester came back with a 24-12 run in the rest of the quarter. The first ended with the Riders up 109-87 on aggregate.

The Riders exploded for seven quick points to start the second, taking their first lead of the game. Their BBL-best defence locked in, holding the Patriots scoreless through the first four minutes. Whelan added seven more points to his game tally, as Leicester grew their lead.

Plymouth made a nine-point run to end the half, taking a 45-42 lead into the locker rooms. A ten-point quarter from Crandall meant he led the Riders with 12 points by the half.

The Patriots came out of halftime strong, scoring eight quick points. Graham-Bell built on the Plymouth momentum to score seven straight, as Plymouth took the aggregate lead. Crandall picked up his fifth foul, sidelining him for the remainder of the game.

Jackson responded, driving to the lane on four straight possessions for eight points. The Omaha graduate took the game by the reigns, snatching back the lead with 10 points unanswered.

Riding the wave of momentum, Leicester’s 17-2 run tied the game in a raucous Morningside Arena. Jackson’s free throws made it 63-63 entering the fourth.

Conner Washington took over the scoring load to start the final quarter, scoring six points to stretch the lead. The sides traded buckets in the fourth, as the Riders kept their opponents at arm’s length.

With two minutes on the clock, Jackson drained a three to take the roof off the arena. Washington drained four free throws down the stretch, sealing the win for Leicester.

“Geno going out brought us together in the third. It really motivated us. I was ready to go,” said Jackson postgame.

The Riders will head to Glasgow for their next game, the first of two legs against the Rocks. A win in the game would set the Riders up to progress through the semi-finals, as they go for the treble on the season.