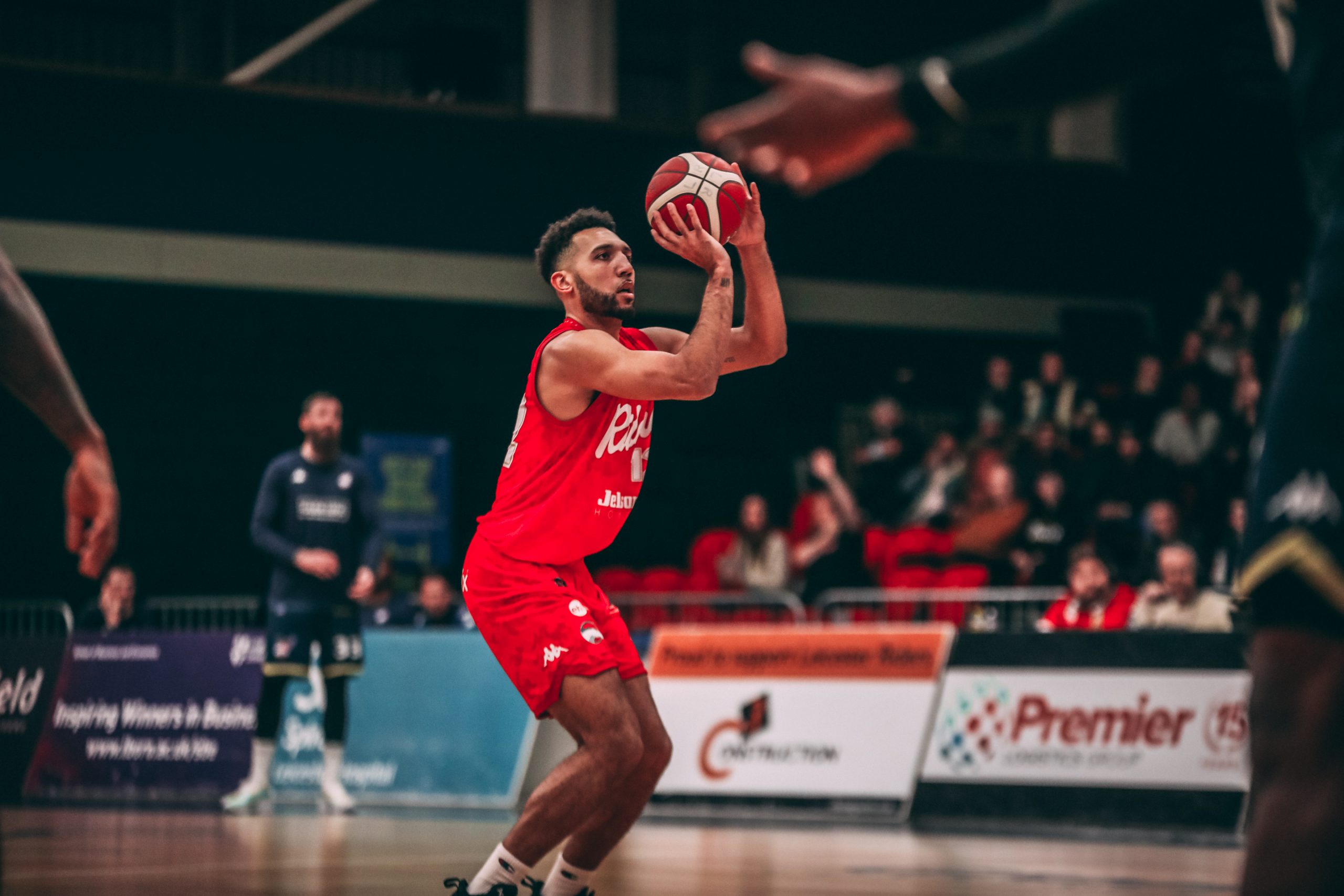 The Riders will face the seventh-seeded Glasgow Rocks in the semi-finals of the BBL Playoffs! The first leg will be played on the road, on Saturday 7 May at 2 pm. The teams return to the Morningside Arena for the return fixture on Monday 9 May, tipping off at 7:30 pm.

Get your tickets for the home leg here!

The Riders earned the top seed for the postseason in dominant fashion, winning the league title by a franchise-record margin of 16 points. They finished the year with a 25-2 record, earning a first-round matchup against the eighth-seeded Plymouth City Patriots.

After a slow start to the first leg, the Riders had control of the tie by the third quarter. They took a 15 point advantage into the return fixture, led by a 19 point performance from GB sniper Patrick Whelan.

In the second leg, hosted at the Morningside Arena, the Patriots fought back, eventually taking the aggregate lead midway through the third. But Omaha graduate Zach Jackson responded with 10 points unanswered, snatching back momentum that the Riders carried to the finish.

“Geno going out brought us together in the third. It really motivated us. I was ready to go,” said Jackson postgame.

With a 12-15 record through the season good for the seventh seed in the playoffs, the Glasgow Rocks faced the second-placed Sheffield Sharks in the first round. The Rocks won the season series 2-1, matching up well with their opponents.

In the home leg, four Sharks scored over 15 points to leave the Rocks in a seven-point hole. Glasgow’s player/coach Gareth Murray scored 20 to keep them in the tie heading to Sheffield, but their 3-11 away form through the season left them as heavy underdogs against the two-seed.

But pre-game news of injuries to the Sharks’ star backcourt pairing, Antwain Johnson and Rodney Glasgow Jr, put the Rocks on the front foot for a comeback. The Rocks took advantage of the Sheffield injuries, beating the Sharks 96-72 to pull off the upset win.

One round away from the playoff final, the Rocks will hope for another underdog win to progress to the O2.

Warrington born Patrick Whelan led the Riders through the first round of the playoffs, averaging 18 points over the two legs, good for tenth in the BBL. He went 5-11 from three, and 11-11 from the free-throw line, an efficient showing in his first BBL playoff action.

Whelan was the BBL’s second-best three-point shooter this season, hitting 48% of his deep shots. His 15 points per game led the Riders, and he has carried his form into the postseason.

Whelan’s bucket getting capabilities, combined with his elite defence on the other end, make him a formidable opponent for opposing teams. With seven 20 point performances on the year, the William Jewell graduate is capable of big games to lead Leicester to wins.

After leading the Rocks through the season with 18.4 points per game, Jordan Johnson put up big numbers against the Sharks to help Glasgow to the semi-final. Johnson scored 17.5 points over the two legs, with an 18 point performance in the second leg seeing his side through.

His scoring ranked top five in the BBL this season, and he made waves with his playmaking ability too. The UNLV graduate dished 8.4 assists per game, the 13th most in a single season in league history.

The former G-Leaguer, who played his first pro season with the Rio Grande Valley Vipers, is a dual-threat point guard, able to score and set up his teammates at an elite level. Slowing down Johnson would go a long way to helping the Riders through to the playoff final.

The Riders swept the season series against the Rocks, winning all three games in the season. Leicester won the games by an average margin of 24 points, blowing out their opponents in all three meetings.

Their previous game was the second-last fixture of the Riders’ season, a 101-86 victory in Glasgow. Mo Walker led the team down low, scoring 17, while Jordan Harris led the game with 19 for the Rocks.