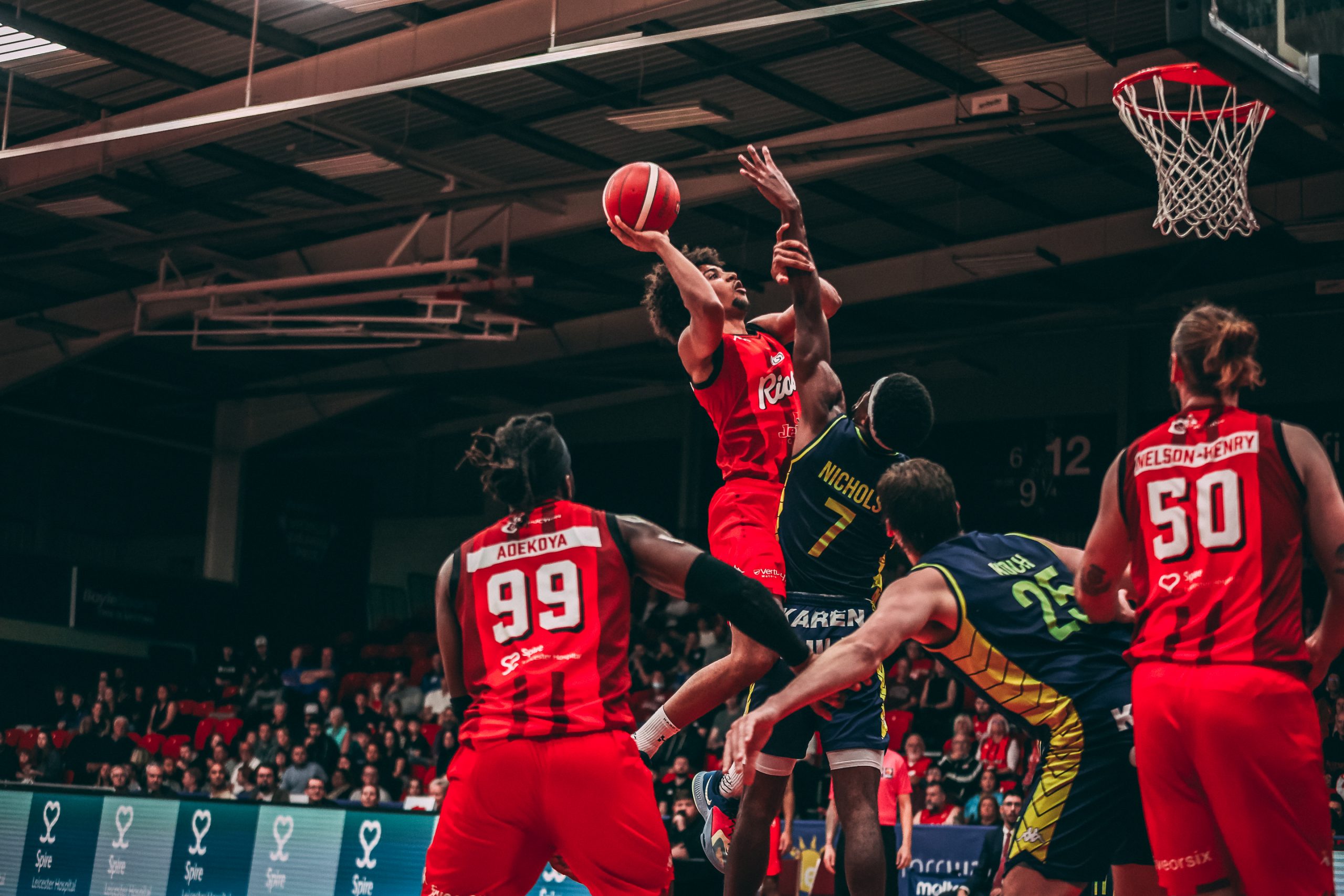 Riders take the win against Sharks

The Riders improve their season record to 7-3, after a gritty 71-58 win against the Sheffield Sharks.

A 21-11 fourth quarter saw the Riders win a closely fought contest, where the Sharks’ kept the hosts honest throughout. Zach Jackson led the scoring with 17 points, 11 coming in the final period to see out the game.

The Sharks’ BBL-best defence proved a tough test for Leicester, whose three-point shooting saw them build a lead late. They shot 40% from deep and held their opponents to 27%, which proved the difference between the sides.

Kimbal Mackenzie continued his hot form, providing a hot hand from the bench. He did not miss from the field, scoring 11 points in 15 minutes of action.

The opening stages were closely fought between two great defensive outfits. Both sides struggled to find an offensive rhythm, but the Riders closed the quarter with a 9-0 run, led by four points and an assist from Jackson.

His assist fed new man Aaron Menzies for his first points in Riders’ red, slamming it down with two hands to get the home fans on their feet. They ended the first up 15-10, and with the wind in their sails.

The Sharks fought back in the second, playing tough defence to keep it a low-scoring affair. Bennet Koch got to work down low, scoring 12 of his team’s 32 points by halftime. The Sharks won the second 22-15, to go into the half up 32-30.

The sides fought closely in the third, as the score remained within a score throughout the period. Marc Loving concluded the action in the quarter with a three to put Leicester up 50-47.

The Riders burst out the gate in the fourth, taking the game by the reigns. Jackson’s finish in close made it 54-47 a minute and a half into the final period of play.

The Riders kept their hands in the lane, their intense defensive pressure forcing five Sharks turnovers early in the quarter. They kept the Sharks at arm’s length, as Patrick Whelan’s three made it a ten-point game with three minutes remaining.

Jackson kept the foot on the accelerator, draining another three for his 11th points of the fourth. Darien Nelson-Henry’s putback sealed the deal with half a minute remaining, securing a hard-fought win.

“Defensively, I thought we were excellent tonight,” said coach Rob Paternostro post-game. “Holding them to 58 points, 30 in the second half, is a great effort, and it’s something that’s been a point of focus for us.”

“They played good defence too. They like to play slow-paced games, and the important thing was not to panic. It’s easy for guys to get out of rhythm a bit, but we were solid in the second half, and we’ve got a lot of veteran guys who understand what it takes to get a win.”

The Riders take a trek up north for their next future, heading to Scotland to take on the Caledonia Gladiators for the second time this season. A win would see them improve to 8-3, as they contest the top spot in the BBL Championship standings.