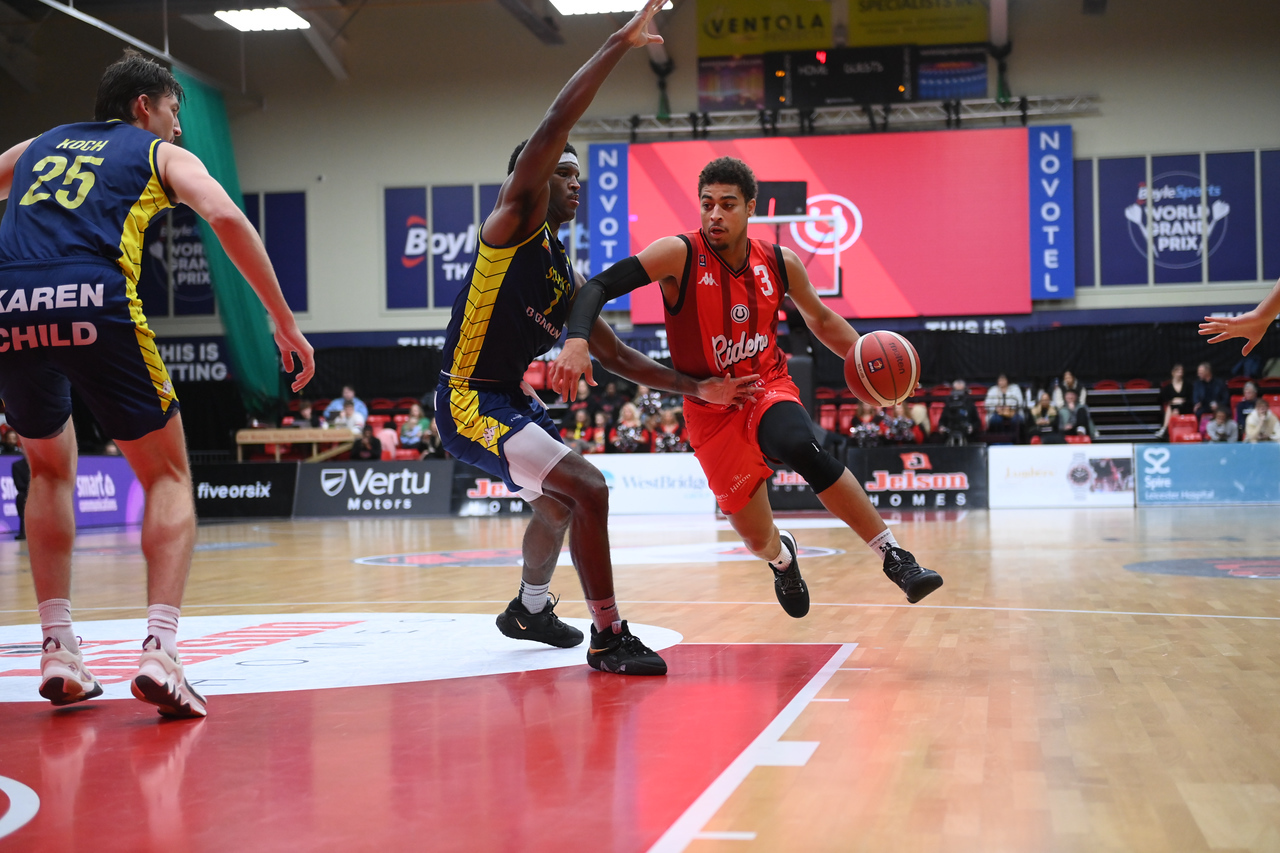 The Riders head to Glasgow for the second time this season, where they take on the Caledonia Gladiators.

Riders on a roll

Leicester comes into this one having won five on the bounce, finding their rhythm early in the season. They hold a 7-3 record, one behind the league leaders as they climb the BBL Championship table.

A 71-58 home win against the Sheffield Sharks was their seventh of the year. Zach Jackson’s 11-point fourth quarter saw the Riders burst out to a late lead, as Leicester looked to the Kansas native down the stretch, as they have many times this season.

“Zach’s been awesome this year, night in, night out,” said head coach Rob Paternostro. “He’s a guy that picks his spots, but you know when the money is on the line, he’s ready to contribute.”

Jackson is averaging 15 points per game this season and is one of three Riders players scoring that many on the season. Marc Loving and Patrick Whelan are also achieving the feat, Whelan leading the team with 15.9 a night, shooting 47.5% from three.

The team leads the BBL in three-point shooting and is the most efficient team shooting from the field. They score the second most points per game and will hope to continue that trend in this one.

The Caledonia Gladiators possess a 3-5 record, despite having played just one of their first eight games at home. Their only game in Glasgow came against the Riders, where they secured an 89-81 win.

David Sloan showed out for Caledonia in the game, putting up a monumental 36-point performance. The American point guard made five threes and shot 57% from the field to will his team past the defending champions.

Sloan has exploded offensively early in the season, his 23.4 points per game leading the BBL. The first-year pro’s 36 against Leicester was still only his second-highest-scoring tally of the season, having hung 37 on Bristol earlier in November.

The Gladiators look to turn games into gritty affairs, playing at the second-slowest pace in the league. They get their hands in the lane on defence, averaging the most steals, often forcing their opponents into mistakes.

Caledonia enters this one having lost three on the bounce, but a second-straight win against last season’s treble winners would go a long way to restoring momentum to their season.

The BBL’s highest scorer David Sloan will look for a similar performance to his 36-point showing last time out against Leicester. The East Tennessee State graduate has torched the league with his scoring so far, and can go off for huge numbers every night.

Sloan scored 12.6 points per game in his final college season, and dished five assists per game. The Louisville native ranked third in his conference in assists, showing off his ability to both score and facilitate.

Sloan possesses all the qualities needed to score in the backcourt. He’s a quick, athletic ballhandler with crafty moves and a quick release, keeping defenders alert for all 40 minutes.

Facing up against Sloan off the Riders’ bench will be Kimbal Mackenzie, who has given the Riders great minutes off late. He did not miss a shot in his most recent game, the win against the Sheffield Sharks, scoring 11 points from five shots.

“Kimbal’s playing great basketball. He recovered from an ankle injury from last week, and was awesome tonight,” said Paternostro after the game.

Mackenzie is shooting 51% from the field this season, a steadying presence off the bench.

Mackenzie can play either guard position effectively on and off-ball offensively. He can score from anywhere on the court, making 37% of his threes in his senior year in college. His skill set allows him to fit seamlessly into any Paternostro lineup.

The game will be streamed live on the British Basketball League Youtube channel, tipping off at 7:30 pm!