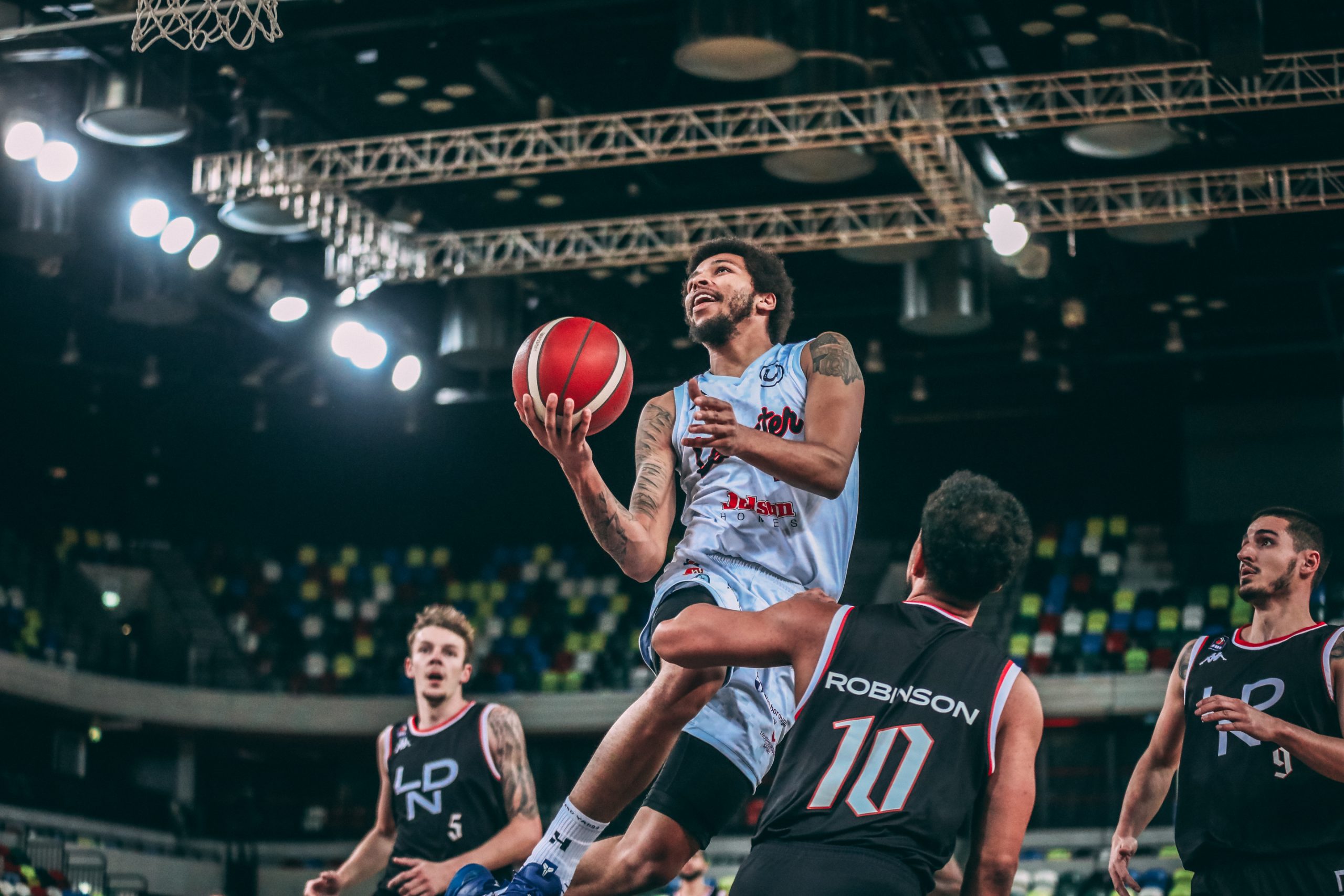 The Riders continue their record-breaking undefeated start to their season, improving to 12-0 with a 86-69 win against the Manchester Giants. Darien Nelson-Henry led the game with 23 points and six rebounds, hitting big shots throughout a dominant victory.

The game was won largely in the second quarter, as the Riders league-best defence held the Giants to just four points, establishing a 21 point lead by halftime. Geno Crandall had eight points and six assist in the second, leading Leicester to a commanding advantage.

Despite suffering a blowout in the second, the Giants won the remaining three quarters 62-60 to threaten the Riders’ lead. Manchester’s leading scorer on the season, Tyrik Armstrong, topped his team’s points tally again, scoring 15 points and dishing eight assists.

The Riders played through the hot hands of their captain to begin the tie, as Nelson-Henry scored six points in the opening five minutes. The University of Penn big man hustled down low to hunt down missed shots, earning second-chance points for his team.

Despite the big man’s play, the game remained close through the first quarter, which ended 24-23 in the Giants’ favour. Their star guard Armstrong scored eight while Presbyterian graduate Francios Lewis scored six off the bench.

After a quick start, the Giants’ offence stalled in the second. The Riders locked in their BBL best defence to keep Manchester scoreless through the eight minutes of the period, as they established their first real advantage.

Crandall broke away on the fastbreak to make it 31-24 in Leicester’s favour, forcing coach Llyod Gardner to call a Giants’ timeout. However, the break in play failed to halt the Riders’ surge, as Patrick Whelan’s finish over Manchester veteran Dan Clark put them up double digits.

With the wind in their sails, the Riders rode into the distance to close out the half. Marc Loving’s double-clutch jam brought the roof off the Morningside Arena, before Crandall turned up the style with a between the legs dish to Whelan on the break.

Clamping the Giants and making momentum-building plays, Leicester held a 49-28 lead into halftime.

Rim protection was the key to the Riders maintaining their lead to start the second half, as Loving and Crandall’s colossal blocks denied the Giants’ kick-starting a comeback.

However, after getting blown out in the second, Manchester did chip into the lead in the third. Former Rider Jamell Anderson’s breakaway slam cut the game to 16, and his denial out of bounds against Whelan on the other end made sure it remained a 16 point deficit.

Leicester responded with a bang, draining back to back threes to end the third, putting them up 70-48 entering the final stanza.

The Giants started the fourth with an 8-0 run, threatening to make it a contest in the closing stages. After a Riders’ timeout, Nelson-Henry attacked the teeth of the Giants’ defence, scoring four quick points to keep Manchester at arm’s length.

After their captain lead them through the Giants’ threat, Leicester saw the game out comfortably to maintain their undefeated record.

Nelson-Henry commented on the performance post-game: “We pride ourselves on defence. We work on our defensive strategy all week. We’re smart enough and we communicate enough to figure things out on the fly, and it helps us that we have a high IQ group of guys.”

“It feels good to be back in the starting lineup, but whether I’m starting, coming off the bench, playing five or 40 minutes, it doesn’t matter to me. I just want to get that W.”

The Riders face a quick turnaround in their next game, as they head to London to take on the Lions. A win would improve the Riders’ record to 13-0, continuing their best start to a season in franchise history.