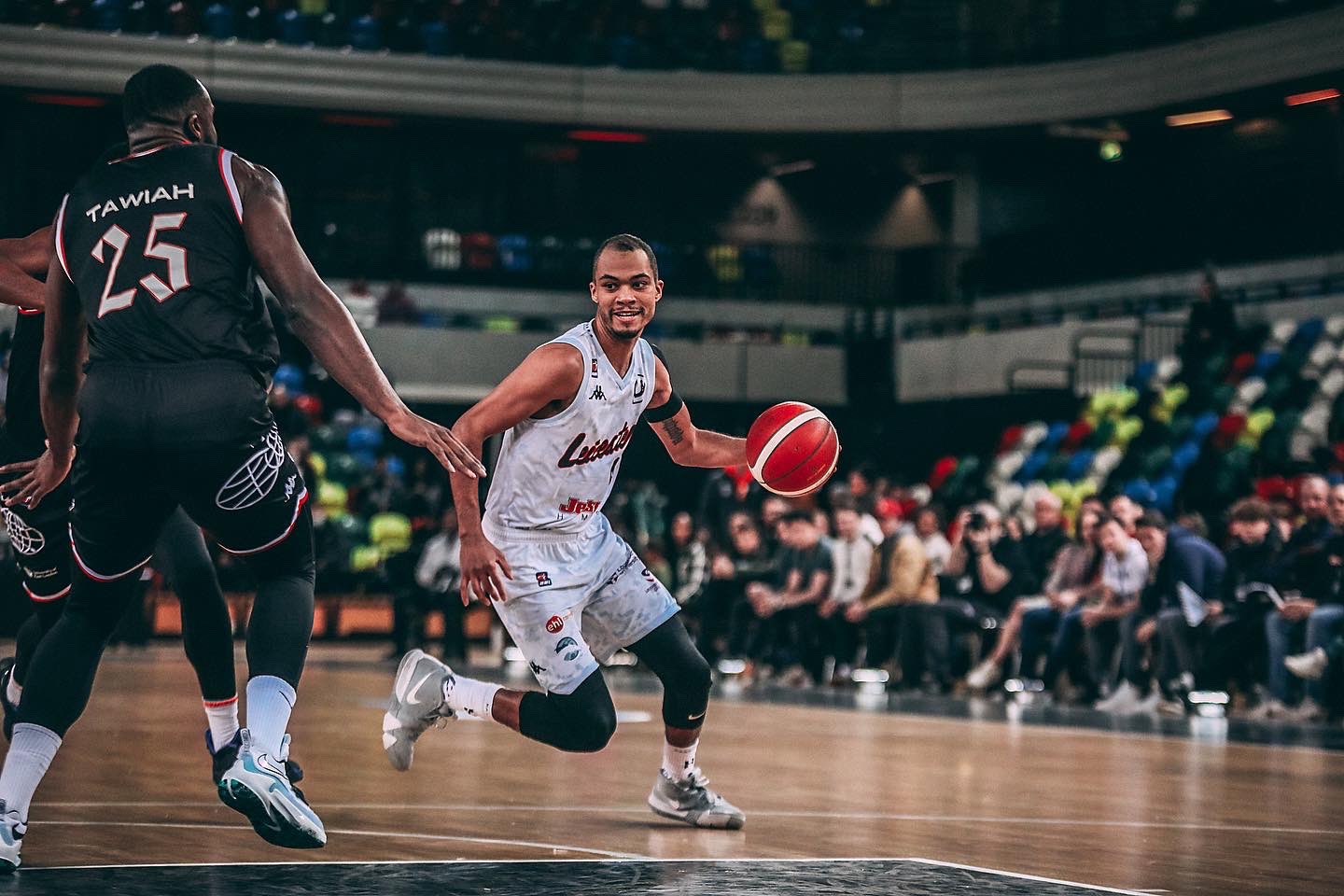 The Riders have asserted themselves as the premier team in the BBL this season. An 86-69 win against the Giants last time out improved Leicester’s record to 12-0, their best-ever start to a season.

Picking up where he left off last season, reigning MVP Geno Crandall has led the way for the Riders this season, stuffing the stat sheet with 14.1 points, 7.8 assists, 5.9 rebounds and 2.3 steals a game.

Crandall was at his brilliant best to help Leicester to their first silverware of the season, picking up the BBL Cup Final MVP with 26 points. It was the Giants again on the end of a 86-69 Riders victory, as they lifted their first BBL Cup in seven years.

Defence has been the key to the Riders success this season, with no team able to score 80 points against them in the league. Leicester captain Darien Nelson-Henry spoke about the Riders’ defence prowess:

“We pride ourselves on defence. We work on our defensive strategy all week. We’re smart enough and we communicate enough to figure things out on the fly, and it helps us that we have a high IQ group of guys.”

Set to play the second-ranked Lions’ offence in their next game, the Riders defence will need to be locked in to improve to 13-0.

In their previous game, the London Lions made BBL history, becoming the first British team to win in the second round of the FIBA Europe Cup. An 82-75 victory against Danish side Bakken Bears in front of a raucous Copperbox Arena paved the way for future success for British teams in Europe.

Domestically, the Lions haven’t enjoyed the same success. They sit with a 5-3 record, and face back to back league losses after falling to the Riders 80-67 last time out. The game was close entering the fourth, but the Riders defence held London to just four in the final quarter, securing an important victory.

That quarter was uncharacteristic of the Lions, who possess the second-ranked BBL offence, placed behind the Riders. Their defence leaves a little to be desired, however, giving up 83.5 points per game compared to the Riders 67.6.

Dirk Williams has led the hot Lions offence through the early stages, scoring 21 points per game. His scoring tally is ranked second in the BBL, and he is scoring at an impressive 53% from the floor.

To add to their roster, the Lions have called on reinforcements, signing 6’11” big Ryan Martin. Martin was last seen averaging 23 points and 10 rebounds for the Bakken Bears and will bring EuroCup experience to the center position.

Getting back into the starting lineup after an injury early in the season, Darien Nelson-Henry got back to his brilliant best against the Giants last time out. The Penn graduate scored 23 points in the win, going 8-12 from the floor.

“It feels good to be back in the starting lineup,” commented Nelson-Henry postgame. “But whether I’m starting, coming off the bench, playing five or 40 minutes, it doesn’t matter to me. I just want to get that W.”

Graduating college in 2016, Nelson-Henry began his professional basketball career in Poland, signing with Jezioro Tarnobrzeg at the age of 22.

He would go on to play in Poland and Austria, enjoying a breakout year averaging a monster 20 points and 12 rebounds a game for UBSC Raiffeinsen Graz. Darien then took his talents to Leicester in 2019 to play for Rob Paternostro’s side.

Nelson-Henry is averaging 13.7 points and six rebounds on the season, and his intangible leadership qualities have been invaluable to the Riders over the last three seasons.

In their historic game in Europe, Dirk Williams led the Lions to victory with 23 points. Shooting 64% from the field, Williams introduced himself to the European stage with a bang, taking over the tie with five threes.

Spending his first two professional seasons with the Sheffield Sharks, this marks Williams’ fourth season in the BBL. He has made progress in each of his five professional years, having spent a year away from Britain in the Hungarian first division.

The former UAB Blazer scored 10 points per game in the NCAA D1, spending two seasons in college before turning pro. The 6’5” guard is a relentless corer, capable of pulling up from anywhere on the court and going off for hot shooting nights.

This is the sixth encounter between these sides this season, after a number of clashes in the BBL Cup. The Riders got the better of the Lions in the Cup, beating them 178-170 over two legs in the semi-final.

They most recently met in the league, an 80-67 Riders win. Leicester held London to four points in the final quarter, clamping their opponents to secure an important win.

Patrick Whelan led the Riders with 17 points, going 6-11 from the floor. On the other end, Dirk Williams went off for 16 points, despite his side falling short in the game.