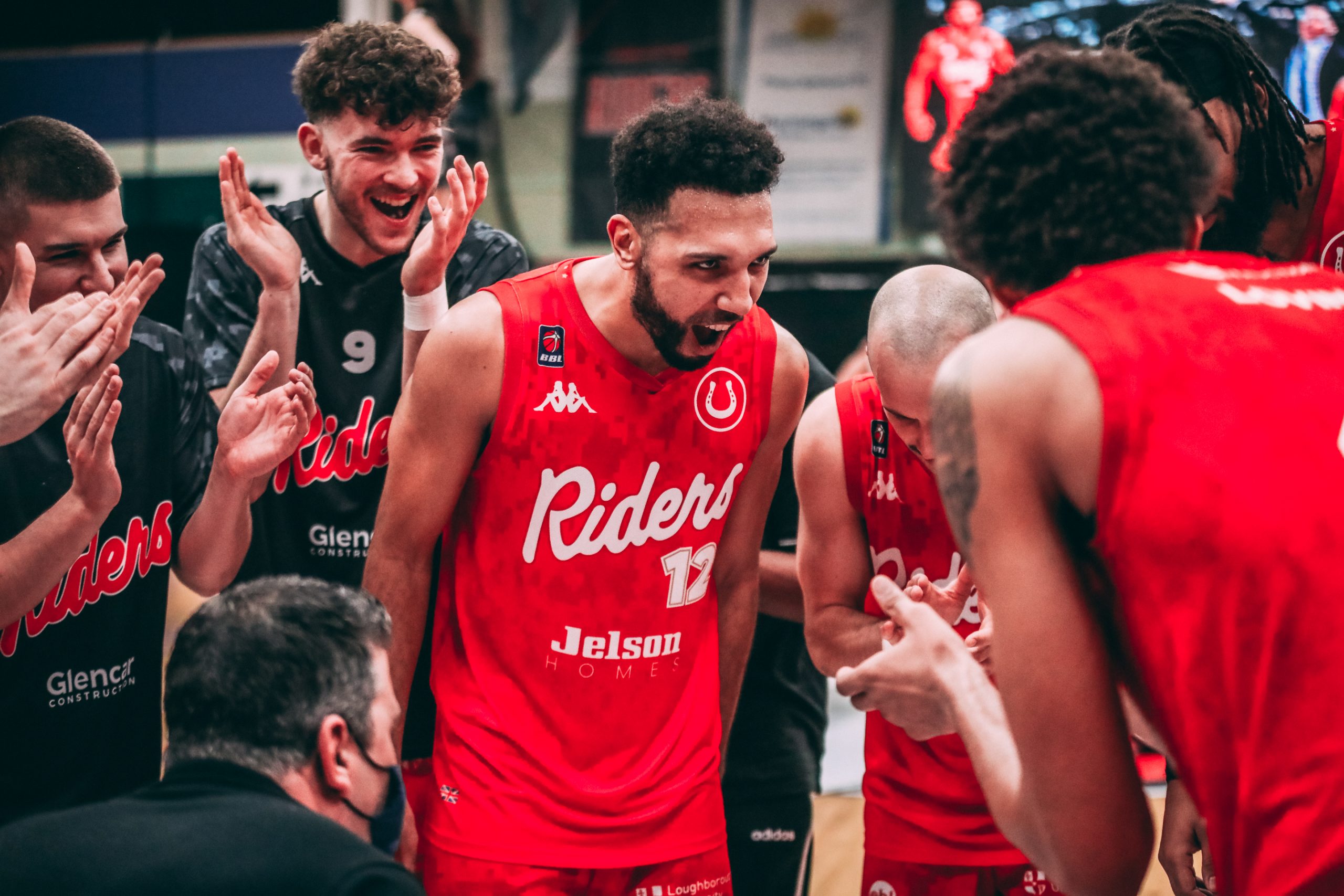 The Riders emerged victors of a clash between the BBL’s titans, beating the London Lions 178-170 on aggregate in the BBL Cup semi-final. The Riders entered the tie with a 99-96 advantage, and won the second leg 79-74 to advance to their first Cup final since 2016.

Led by 15 points and six rebounds from Zach Jackson, the Riders saw the game out after a dominant first half. The Riders romped the Lions 25-14  in the second quarter to build their lead, setting a foundation to win the tie against a spirited Lions comeback.

The highly anticipated game lived up to its billing, thrilling a packed Morningside Arena. The raucous crowd saw their team progress to the Cup final in an emphatic fashion, as they acted as a vital sixth man for all four quarters.

Coach Rob Paternostro put out a call to Riders fans before the game to come out in full force. Postgame, he thanked them for their support.

“I thought the crowd was fantastic. These types of games call for that type of crowd. That’s why you like to have the second leg at home. The players fed off that energy, and this group deserves to be in a final.”

In the end, the Riders defence got the job done, as they held the BBL Cup’s highest-scoring offence to their lowest tally in the competition. Former G-League guard Isaiah Resse led London with 20 points and seven assists, his third-quarter effort kick-started his team’s fightback.

The Riders bolted out the game for a big lead. Patrick Whelan got the game going with a bang, throwing down a breakaway jam for the first bucket of the game.

The dunk kick-started a wave of Riders drives to the hoop, resulting in Lions’ star shot-blocker Kylor Kelly ending up in early foul trouble.

Kelly’s absence from the early stages opened up the lane to the hoop further, allowing the Riders to jump up to a 13-6 lead. The Riders run was capped off by Marc Loving’s strong drive, finished by a two-handed slam.

In response to the hot Riders start, the BBL Cup’s leading scorer Dirk Williams scored five straight to get the Lions back close. Williams’ play got the visitors rolling, as they cut the lead to a point with back to back threes.

The back and forth first period was concluded with a highlight from the reigning MVP. London looked to have stopped a Riders fastbreak, before Geno Crandall threw an audacious no-look pass behind his head to Kimbal Mackenzie, who laid it in for his eighth points of the quarter.

Jackson took the roof off the Morningside in the early stages of the second quarter, going baseline before throwing down a dunk over a contesting Williams. Jackson scored back to back buckets to put the Riders up eight.

The momentum remained with Leicester through much of the second quarter, as they built their lead to double digits. Crandall sent the home crowd into a frenzy, taking Resse off the dribble, dropping him with quick handles before draining a three in his face to force a Lions timeout.

Leicester saw out the half with an 18-6 run, putting them up 52-34 as they entered the locker rooms.

The Lions came out the gate swinging in an attempt to climb back into the tie, starting the second half with a 10-2 run led by eight from Reese. The hot start to the quarter allowed the Lions back into contention, cutting the lead to four.

Leicester stopped the bleeding to close out the third, going on a 6-0 run finished off by a Crandall breakaway slam. The Riders entered the final period leading 67-57.

The Riders recaptured their first-half form to start the fourth, building their lead to 14. In response, London recaptured momentum to continue their comeback. Williams’ three with four minutes left cut the game to five.

The Riders held on, courtesy of two colossal buckets from Jurbil Adekoya in the clutch. The Valparaiso graduate has performed in the biggest moments all season long and scored four of his nine points in the fourth.

Paternostro sang the praises of his players after the game: “Jubril was excellent today. His pick and roll defence in the second half was a real difference in the game. He’s been a real unsung hero for us this year.”

Julian Washburn hit a three for the Lions to make it a four-point game, but a huge offensive rebound from Jackson late on led to game-sealing free-throws from Loving.

The final will take place on the 30th of January at the Utility Arena in Birmingham. The Riders will face the Manchester Giants, hoping to win their first BBL Cup since 2014.

Assistant coach Pablo Vazquez will be coaching in his first BBL Cup final in his tenure. He spoke on the test the game will present.

“Manchester are a tough team. A lot of talent, and good British players. It will be special to play Jamell [Anderson] because it will be the first time we see him not wearing red. We’re going to try and do our thing and bring silverware back to Leicester”.