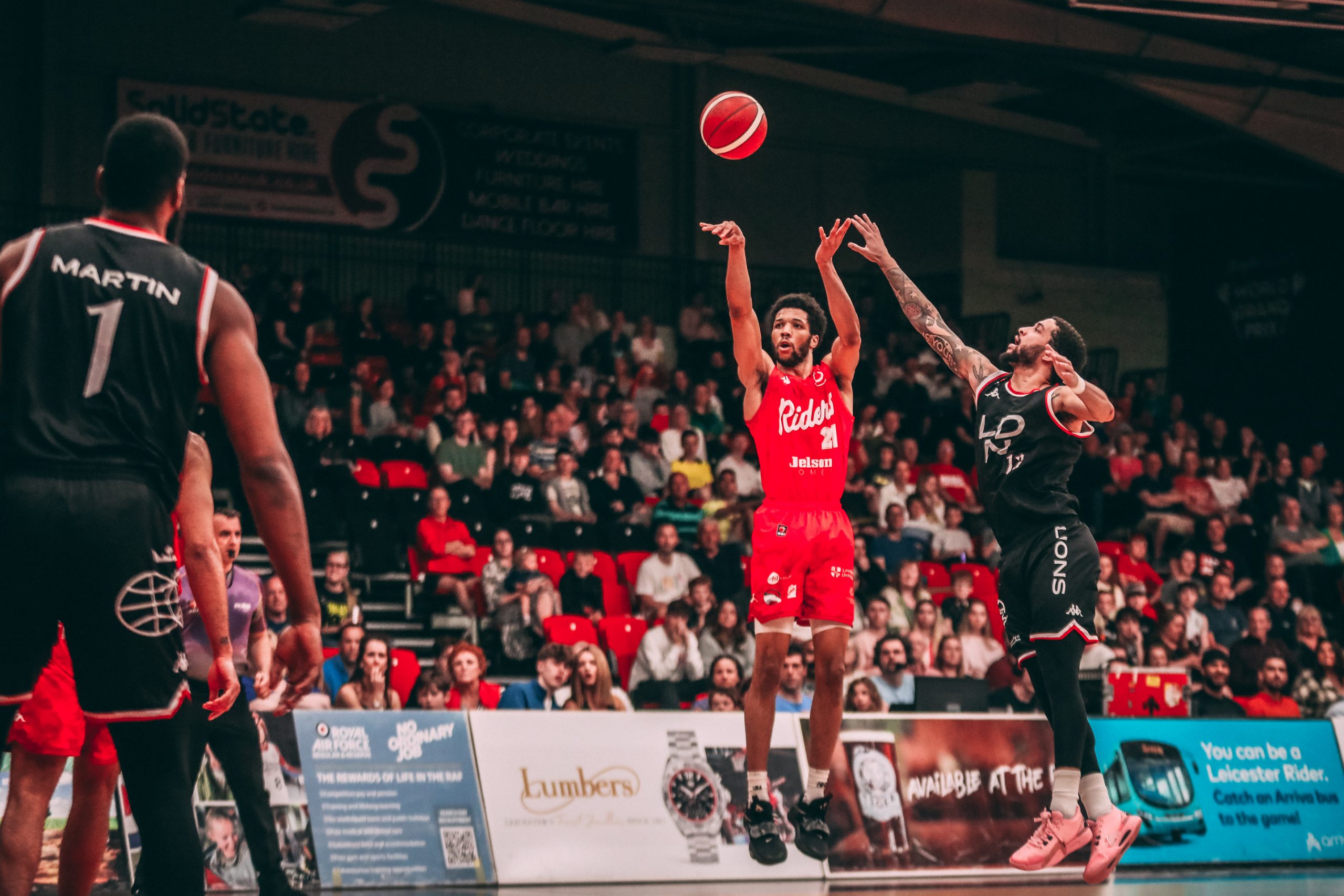 The Riders made it seven wins on the bounce with a cracking Easter Sunday display, beating the London Lions 103-67.

All of Leicester’s starters scored double-digit points in an emphatic team effort. Marc Loving led the team with 18 points in 27 minutes, while Geno Crandall put up a near double-double with 16 points and nine assists.

The league champions put on a clinic from wire to wire, blowing out their opponents to maintain their hot form entering the postseason. The Riders hit 16 threes on the game to torch the visitors.

For the Lions, it was their fourth straight loss as they struggled to contain Leicester’s league-leading offence. Italian sniper Lorenzo Cugini led the team with 16, going 8/16 from the field.

Crandall pulled the strings to get the game underway, the MVP scoring or assisting on five of the Riders’ first seven baskets. The MVP’s play led Leicester to an explosive 18-8 start, with Zach Jackson’s back to back threes establishing the double-digit lead.

Crandall’s play extended through the entire first period, as he scored eight points in his first seven and a half minutes of play. He was bested only by Jackson, who led the Riders’ early three-point barrage to drain three of their seven made triples, as the Riders finished the first up 33-15.

The Lions fought back in the early stages of the second, playing through their star guard Isaiah Reese. Reese, London’s leading scorer on the season, had ten points midway through the quarter, as they cut their deficit to 10.

Crandall checked back in to retake the reigns and made an immediate impact. The Gonzaga graduate drove hard to the rim, before laying in an acrobatic finish through heavy contact for an and-one play.

With momentum back under them, Leicester continued their red hot three-point shooting. The Riders entered the game making 10 threes per game, a tally they had bested by halftime having made 11 entering the locker rooms.

Loving made the play of the game with a circus shot in close, making his 16th points of the first half. He met Julian Washburn at the rim, pulling off a 360 layup to get the fans on their feet. The strong finish to the quarter capped off an astonishing offensive display, which put the Riders up 62-37 by halftime.

The three-point shooting remained locked in out of the locker rooms, as Patrick Whelan kicked off the second half with back to back triples. He and Nelson-Henry combined for 10 points unanswered to start the third, putting Leicester up 35.

The Riders clicked into an offensive rhythm, swinging the ball around the court in a display of elite ball movement. The Lions showed heart, finishing the third with a 10-2 run, but the score entering the final period was 83-55 in Leicester’s favour.

Leicester kept their foot to the floor in the fourth, starting the period with a 10-1 run. Holding a 39 point lead, young prospects Louie Jordan and Greg Wild checked into the game to log valuable BBL minutes.

Jordan got the crowd up late, draining a three from the corner with two minutes remaining. A minute later, Jubril Adekoya sealed the deal with a three of his own, breaking the 100 point mark for his team.

“It’s nice to have the league wrapped up, and now we can play a bit looser. Tonight we were on point for most of the game,” said Whelan after his 13 point performance.

“We showed to the league that we’re not messing around. We’re here to win every game, and that’s what we’re going to try and do every time we go out there. We’ve always got out foot on the pedal.”

With just two games remaining on the schedule, the BBL Championship season will be concluded in the coming week for the Riders. They head to Glasgow on Tuesday to take on the Rocks, before returning home to take on the Plymouth City Patriots on Friday, in the final game of the year.