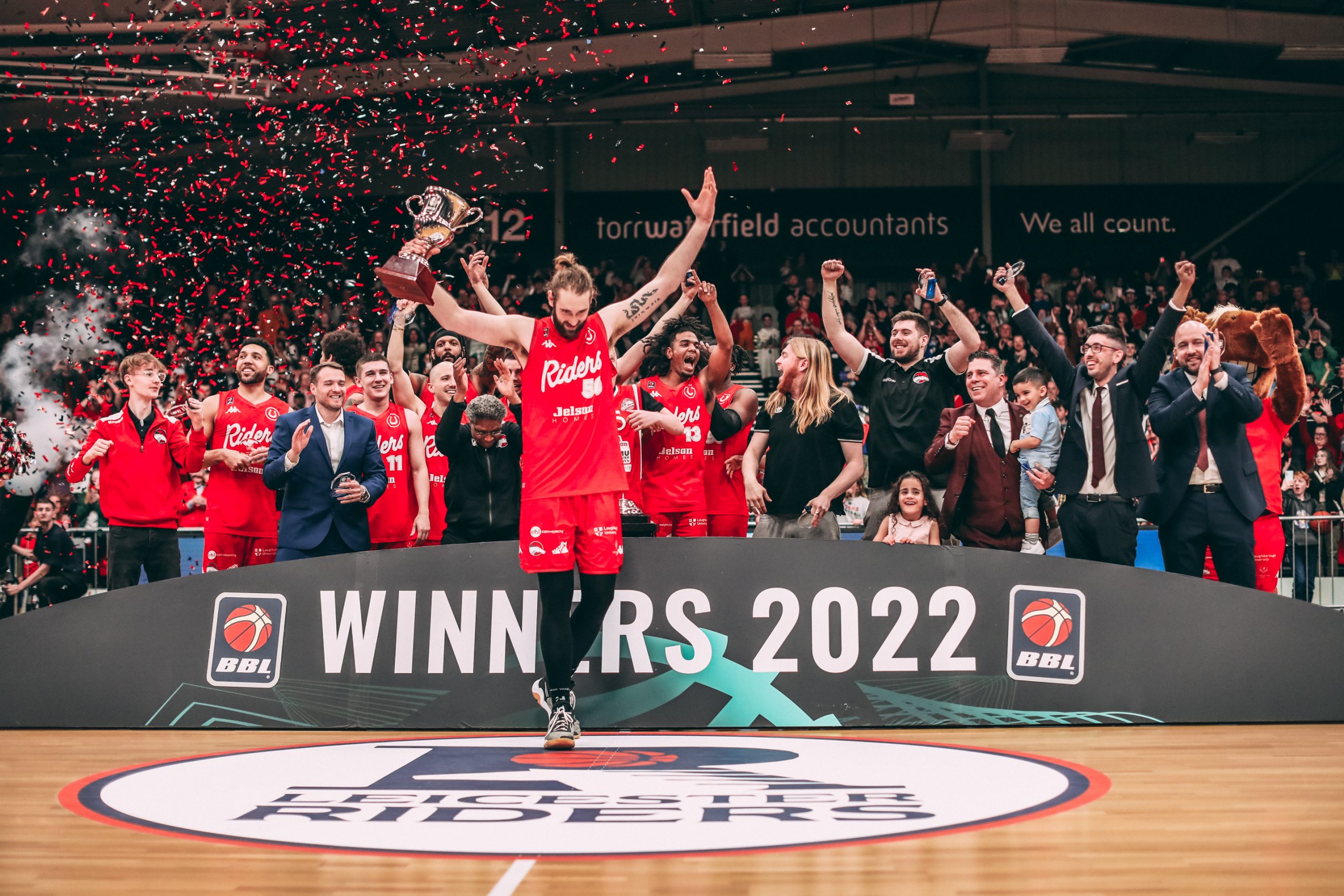 On the night of their coronation as league champions, the Riders won an 88-82 retro night thriller against the Manchester Giants.

With the league wrapped up, the Riders produced the same intensity which has earned them their 23-2 record on the year, in a game that remained within single digits for the full 40 minutes.

Geno Crandall led the scoring for the second straight game with 23 points and six assists, the MVP scoring eight in the final five minutes to inspire a clutch win.

For Manchester, Texas graduate Tyrik Armstrong put on a show with a 21 point double-double. His passing talents were on full display, reaching into his bag of flashy passes to dish 10 assists on the night.

Coach Rob Paternostro reflected on the win: “They wanted to win. No question. We said before the game, let’s just play the way we’ve been playing. The energy in the building helped us go on and that was key in the game.”

This marks Paternostro’s sixth league title as Riders head coach. “It never gets old. Every year is different. Every group is different. But the one thing that stays constant is the fans and the people of Leicester. I feel honoured to be able to work in such a great sporting city.”

Whelan got the game underway with a breakaway two, kickstarting a Riders 9-0 run out the gate. Any notion of a Leicester comedown after the recent title win was quickly quashed, as a Crandall three capped off an electric Leicester start.

The first Giants score came five minutes into the tie, as veteran Dan Clark forged Machester’s first way through the stifling Leicester defence. Clark caught fire for 11 first-quarter points, GB’s all-time leading scorer putting his team on his back to tie the game.

In response, Mo Walker got to work down low, scoring six points in a minute in close. The teams traded buckets to close the first, which ended 21-20 in the Giants’ favour.

Walker started the second how he finished the first, hitting a smooth jump-hook over David Ulph. Followed up by a Washington three, his play was the start of a 9-2 run to begin the period, as Manchester found themselves in the penalty seven minutes from the half.

The game remained competitive throughout the second quarter, as the Riders fended off Manchester’s efforts to climb back into the tie. Martaveous Mcknight scored five of the Giants’ 14 points in a low scoring period.

Darien Nelson-Henry drained a rare three to end the half, as the teams entered the locker rooms with the Riders holding a narrow 40-35 lead.

Leicester got away to another hot start to a quarter, with a 7-2 run getting the second half underway. A Whelan three capped off the burst of momentum, as the Riders gained a narrow advantage.

Despite the Leicester success, the game remained close, with the Giants making key buckets to peg back the Riders’ lead. Manchester took their first lead since the start of the second, with a three from Mcknight making it 49-47 to the visitors.

The Giants rode their wave of hot form, as Tyrik Armstrong’s free throws made it a seven point game.

It was Leicester’s turn to show their grit, climbing back into the game. They got to the line effectively, getting four quick foul shots, before Jackson’s solo breakaway bucket cut the deficit to two.

Jackson channelled the electric energy in the Morningside Arena to take the game over. With a minute to go in the third, he came up with back to back steals, producing the play of the game with a behind the back pass for Crandall to slam down to take the lead.

The score continued to swing back and forth in the final period of play. Six minutes into the fourth, neither team managed to establish an advantage, with just one point the difference to set up a tense finale.

With three minutes on the clock, Whelan and Marc Loving combined for a momentum grabbing sequence. With Armstrong driving to the rim, Whelan came up with a monster chase-down block, before dishing it to Loving who knocked down a three.

The play lit the spark in Leicester to seal out the game. They commenced on a 9-0 run to take an 83-74 lead with a minute remaining, enough to win the tie.

The Riders return next week, where they will host the London Lions on the 17th of April. They will look to maintain their form on the road to the playoffs, as they attempt to go for the treble.