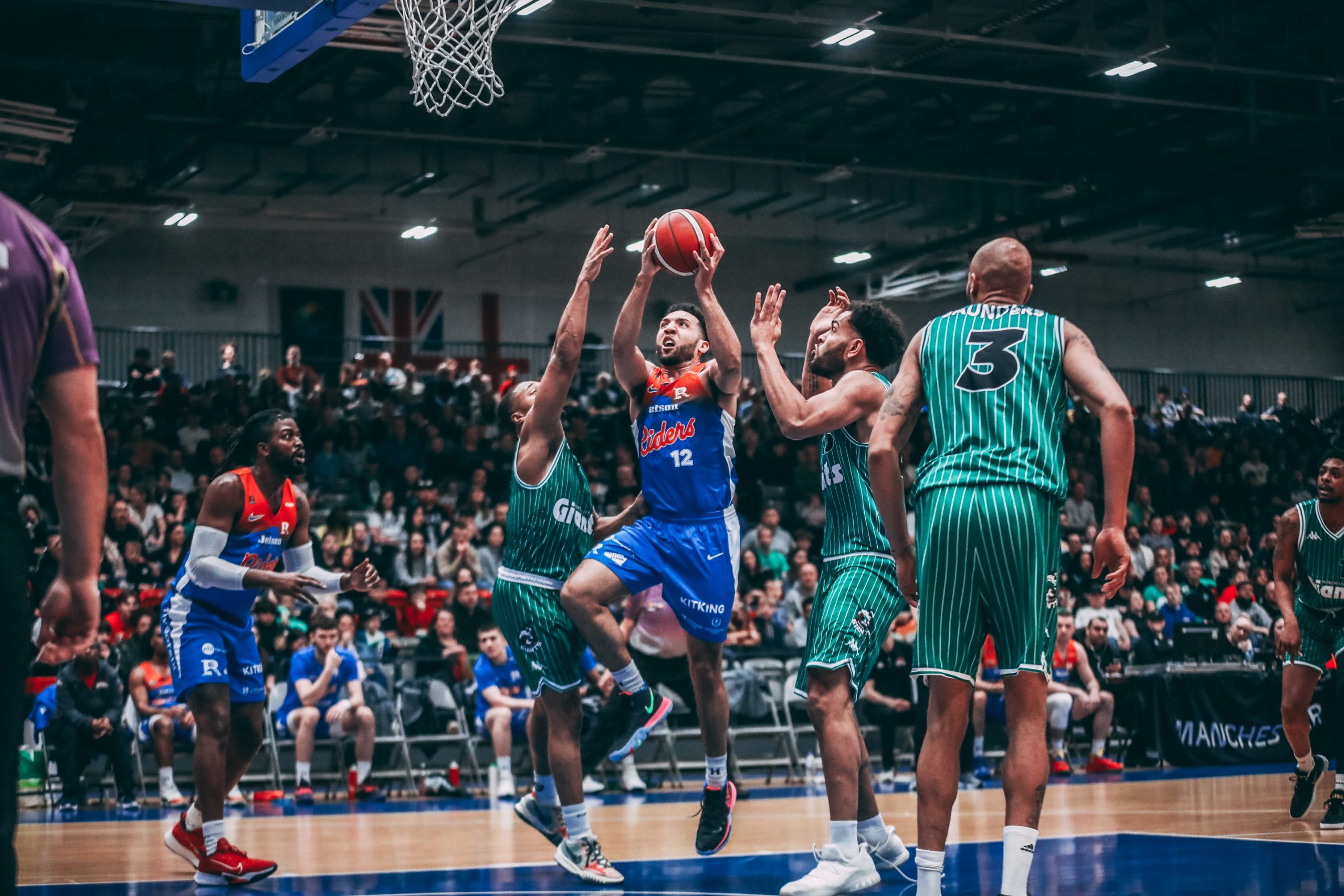 The Riders take on the Giants on retro night! There will be throwback tunes and special guests, as your champions are presented with the BBL Championship trophy!

The Riders began the season 12-1, the best start to a season in franchise history. They never looked back, with their 22-1 record enough to confirm them as back to back BBL Champions. They have now won five of the last six league titles, the most successful period of any team in BBL history.

Patrick Whelan has led the Riders on the season. The GB sharpshooter is enjoying a career year, scoring 15.5 points per game and leading the BBL in three-point shooting by making 48% of his attempts from downtown.

The Riders won the league in style, leading the BBL in points scored and conceded. Their success has stemmed from sharing and protecting the ball, as they turn it over the least in the league while ranking second in assists.

A 77-60 road win against the Plymouth City Patriots brought the silverware back to Leicester, as last season’s MVP Geno Crandall led them over the line. He stuffed the stat sheet with 25 points, eight rebounds and seven assists, as the Riders cruised to a blowout.

The Riders will lift the trophy, their second of the season, after the game. They will look to maintain momentum in the final stretch of the season, as they enter the postseason looking to win their fourth-ever treble.

There is much to play for as the season winds down for the Giants. They are in hot contention for second place in the league, as they are set to make the playoffs for the first time in seven years.

They enter this tie having won five of the last six games, off the back of a solid road win against the Bristol Flyers. Their offence has been in red hot form, scoring over 90 points consistently, led by Tyrik Armstrong’s 21 points in the previous game.

Armstrong leads the team on the season with 16.6 points per game. The first-year pro out of Texas Southern has enjoyed an emphatic rookie year, after averaging 14.3 points in his final year in college.

The Giants’ recent form has catapulted them to second in the offensive standings, as they look to make a final push for a high playoff seeding. A win against the Riders would put them in a solid position to continue their red hot finish to the year.

Riders veteran Conner Washington played his role to great effect in his previous game, scoring nine points in four minutes to close the third quarter. He maintained the Riders’ lead in a crucial stage of the game, all but sealing the win.

The 6’0” Bedford-born guard is elite on both ends, having been named on the 2016/17 BBL all-defensive and all-British first teams. The fan-favourite has put up efficient numbers in limited minutes this season, and his experience will be pivotal to the Riders’ playoff preparation.

One to watch- Giants

Giant’s veteran Dan Clark brings experience from the highest level of European basketball to Manchester, having spent 14 seasons in the Spanish first division. The GB captain is his country’s all-time leading scorer, winning over 100 caps.

The 6’11” power forward is one of the best passing big men in the league, and the 33-year-old is putting up 12 points, seven rebounds and three assists in 25 minutes a game for the Giants.

His standout game this season came against the Lions, as he dominated down low for 17 points and 17 rebounds, dishing five assists and grabbing two steals in the process.

The Giants will lean on Clark’s leadership down the stretch, hoping to continue their good run of games to secure the BBL’s second spot.

The sides last did battle in Manchester back in Febuary, as the Giants edged a close one 85-83. Armstrong led the victors with 24 points, as Will Saunders’ go-ahead three with less than a minute remaining was enough to win the hosts the game.

For the Riders, Patrick Whelan recorded his first career double-double with 25 points and 11 rebounds. The Warrington born guard drove to the rim on the final possession, but found no whistle through heavy contact to give the Riders their second loss of the year.