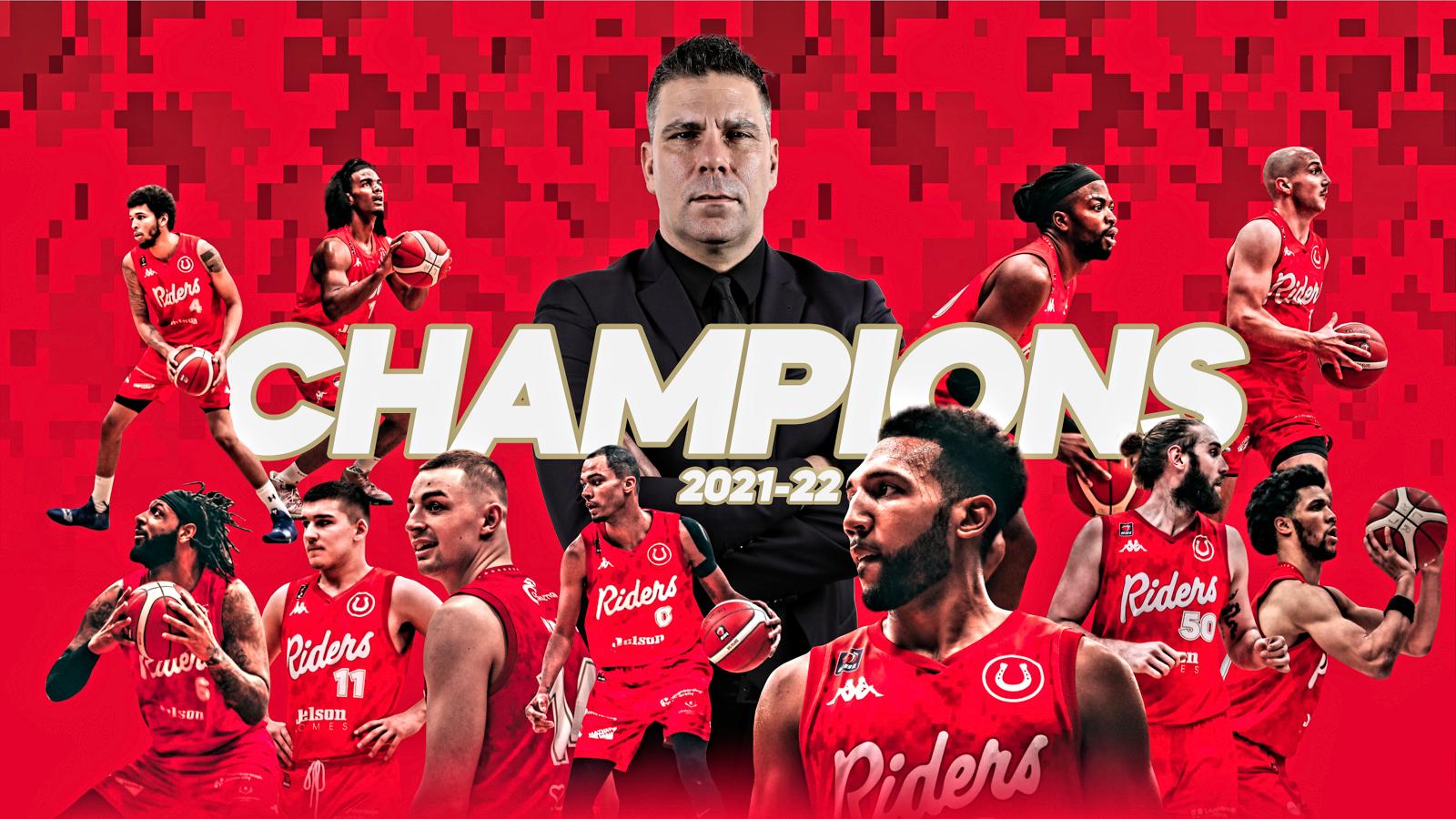 The Riders were crowned BBL Champions with a 77-60 win against the Plymouth City Patriots! Their 22-2 record cannot be caught, as they win their sixth league title.

It is the second back-to-back Championship in franchise history, and last season’s MVP Geno Crandall led them over the line. He scored his league season-high 25 points, recording a near triple-double for the second straight game with eight rebounds and seven assists.

The Riders were composed and confident with the title in reach, taking a double-digit lead in the second quarter and never looking back. After exploding out of the locker rooms to take a 20 point lead, they cruised to a comfortable win in the second half.

Leicester flexed their BBL-best defence throughout, holding Plymouth to under 20 in every quarter. They forced the Patriots into 20 turnovers, suffocating the hosts for 40 minutes.

Mo Walker dominated off the bench, scoring 15 points in 19 minutes. He shot 6-11 from the floor and grabbed four rebounds, leading the Riders bench.

For Plymouth, Kent State graduate Antonio Williams led the way with 20 points, in an impressive individual display, He scored a third of the Patriots’ points, playing 37 minutes in his team’s valiant effort.

The hosts came out the gates strong, as the Riders were locked into a battle in the opening stages. GB big man Rowell Graham-Bell, inserted into the Patriots’ lineup for this fixture, had seven quick points as his team jumped out to a 13-8 lead.

The Riders fought back through Crandall, who had six first-quarter points off 75% shooting. Building off his point guard’s play, Walker got to work down low off the bench, scoring six straight points to earn the Riders their first lead of the night.

Back to back threes from the Riders got the ball rolling in the second quarter, as their league-leading defence remained locked in. Plymouth scored just two points in the opening four minutes of the period, as the Riders’ lead gradually grew.

Crandall and Darien Nelson-Henry linked up for the play of the first half to make it an eight-point game. Running the pick and roll, Crandall drove into the lane and threw it up high for the cutting Nelson-Henry, who slammed it down with authority.

Zach Jackson finished the half with a flurry to take the Riders’ first double-digit lead of the night. He had five in the final two minutes, including a corner three, to make it 43-31. Crandall came up with a monster block to swat Troy Simons’ three-point shot out of bounds, sending the sides into the locker rooms.

Crandall took the game by the horns coming into the second half, driving into the teeth of the Plymouth defence to be sent to the line. On the next possession, he finished off a flashy behind the back pass from Nelson-Henry, before coming up with a steal which led to a Marc Loving three.

Within two minutes, the lead shot up to 17 after a 5-0 Riders start to the third quarter. Leicester gained firm control of the tie after bolting out the gate, and played solid basketball the rest of the way.

Crandall showed off his footwork down low, dropping Cameron King in the post with a pivot before finishing in close. His three on the next play stretched the lead to 20, as he recorded his 17th points of the game.

Riders’ veteran Conner Washington took over the game with four minutes left in the third, scoring six points to close the quarter. The GB guard scored nine points off the bench in 11 minutes, playing a pivotal role in sustaining the Riders’ advantage,

Plymouth’s Albanian guard Elvisi Dusha then concluded the period with a two in close, as the sides entered the final stanza with Leicester leading 67-46.

Ten minutes from the title, Crandall got his head down to put the game beyond doubt. He scored four quick points to make it a 23 point lead, as Leicester had one hand on the silverware.

Crandall came up with the play of the game with six minutes left. Running the fastbreak, he faked a behind the back pass to dupe his defender before finishing in style at the rim, receiving applause from the Plymouth crowd.

The Riders return home on Friday, where the Morningside Arena will host retro night! They face the Manchester Giants in front of what is sure to be a raucous crowd, welcoming their champions to the court.