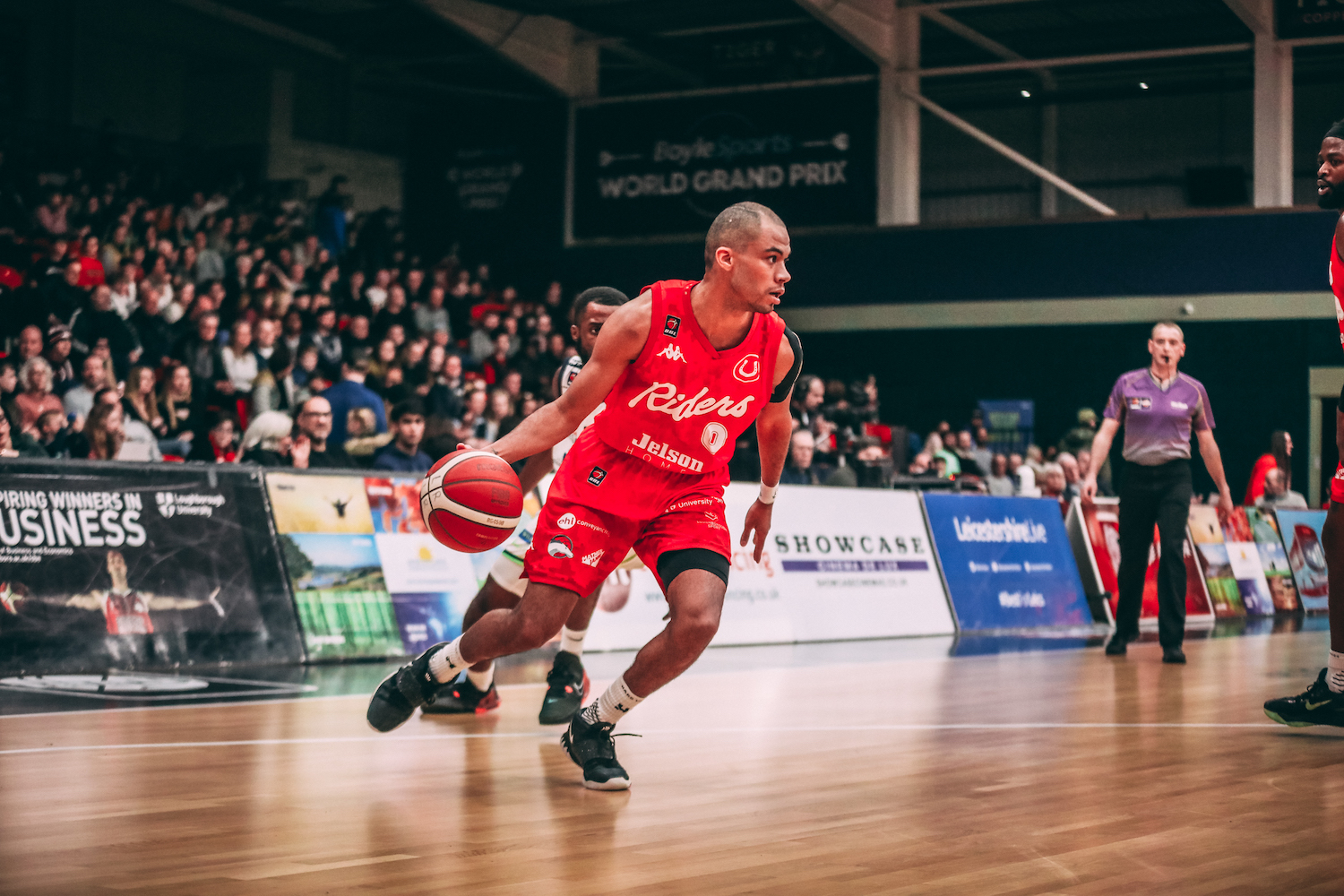 With eight games remaining, the Riders are strong favourites to retain their BBL Championship title. They sit 10 points clear atop the table with a 17-2 record, with a game in hand on the Manchester Giants below.

Leicester possesses the best statistical record on both ends, scoring 89.7 points while giving up just 69.6. Their defensive prowess was on full display in their previous fixture, as they bested the Surrey Scorchers 82-60 on the road.

It was an 11 point game going into the fourth, but the Riders held the Scorchers to just nine points in the final quarter to secure the win. Riders captain Darien Nelson-Henry led them to the win, scoring his 1000th BBL points with 21 in the game.

On the season, it is William Jewell sniper Patrick Whelan who is leading Leicester. His 15.3 points per game, on 48% three-point shooting, has been integral to the Riders’ league-leading success thus far.

“We know there are not many games left. We’re in a great position and we’ve got to keep going,” said coach Rob Paternostro postgame. “One thing I love about these guys is that they are not bothered by any of the noise. They’re not worried about who we’re playing, they come out and play professionally.”

The Riders will need every ounce of that professionalism to come away with the win in this one.

The Flyers have a shot at rising up the ranks of the BBL Championship table, having played five games less than the second-placed Manchester Giants and being eight points behind. Their defensive know-how has been the key to their consistency this season, as they rank third in the BBL by giving up just 77 points per game.

The Flyers are 8-2 when they hold their opponents to under 80 points this season. Trejon Jacob sets the defensive tone on the perimeter for Bristol, the FIU graduate ranking fourth in the BBL in steals, with two per game.

On the offensive end, the Flyers have struggled to establish a rhythm, scoring the fewest points per game in the BBL. Marcus Evans leads them in scoring with 15.9 points per game, but he will sit out this game to serve a one-game suspension.

Without their leading man, the emphasis on slowing down the Riders’ league-leading offence is even greater for the Flyers, should they want to start their potential rise up the table.

Returning from injury in the Riders’ previous game, Mo Walker left his mark on the Scorchers down low on limited minutes. The Minnesota graduate scored eight points in the first half, muscling his defender in the paint.

Coach Rob Paternostro reflected on his center’s efforts: “Mo’s first half set us up and put us in a great position. He was unstoppable for a time, and it really helped us get the lead.”

“We like a lot of his matchups every game, and we knew he could get good position down low, and he’s so skilled down there.”

The Canadian/British big man has been a vital component to Leicester’s success this season. He leads the BBL in winning percentage and also tops the league charts in index rating per 100 possessions.

Walker brings a wealth of experience to the Riders roster, having played in Italy, France and the NBA summer league with the Orlando Magic after graduating college. At the Uni of Minnesota, Walker led the team in rebounding and blocks, and came second in the scoring charts in his senior year.

“Big Mo’s” return to light a spark in the Riders in the closing stages of the season, as his contributions to winning are contagious throughout the team.

With his defensive efforts ranking among the best in the BBL, Trejon Jacob has announced himself as an elite talent on both ends in his first professional season. The Louisianna born guard is scoring 15.6 points per game on 39% three-point shooting, and leading the Flyers with 8.3 rebounds a game.

Jacob enjoyed a successful college career. He scored 451 points as a sophomore at FIU, the second-most in college history. He finished his senior year with 11.6 points per game before graduating and signing with the Flyers.

Jacob has gone off for 20 on three occasions this season, and in his previous game put up a 17 point, 11 rebound double-double against the Sheffield Sharks. The 6’5” sharpshooter has a quick trigger from deep, and can explode for high volume three-point shooting, as demonstrated by the seven threes he made against the Cheshire Phoenix in Febuary.

Last time against the Riders, Jacob had 17 points and six rebounds and will be hoping for another big performance in the absence of his backcourt running mate, Evans.

The last time these teams met, the game went down to the final buzzer, with the Riders taking a narrow 78-75 victory. Zach Jackson led Leicester with 28 points and hit a go-ahead step-back three with less than a minute remaining to win the game for the Riders.

Evans led the fight for Bristol, scoring 18 points. The backcourt pairing of he and Jacob scored 35 points, but Evans’ three at the buzzer was too long as the Riders took home a hard-fought victory.