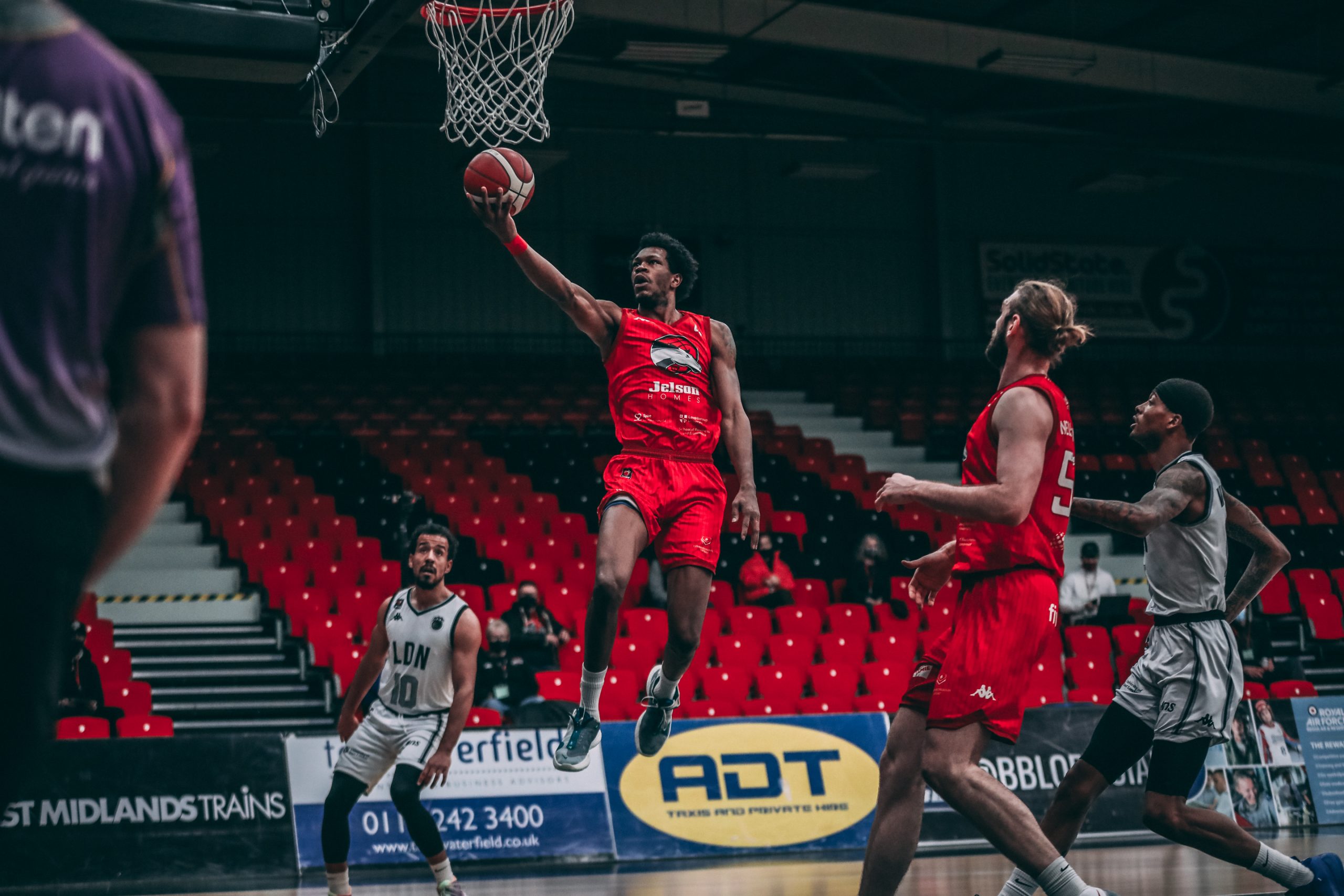 A first-class defensive second-half earns the Riders a 77-73 win against the London Lions. Offence wins games, but defence wins championships, and that phrase has never rung truer than in this game. The Riders held the league’s best-ranked offence to just 19 second-half points, In arguably the most important game in the Riders season so far.

They even the season series, which may prove imperative by the end of the year in Leicester’s championship aspirations. The teams came into the game in the midst of their first inconsistent stretches of the year, both winning three of their last five games in otherwise dominant seasons.

The Riders put their title charge back on track, winning their second consecutive game against their two closest league contenders. Captain Darien Nelson-Henry led the team with 17 points and nine rebounds, as his team beat their league rivals in a highly intense encounter.

Geno Crandall notched his second straight double-double, with 12 points and assists, including eight points in the final quarter to steer the Riders home. Meanwhile, 21 points from two-time BBL MVP Justin Robinson pushed the Riders all the way, along with 18 points from ex-NBA star DeAndre Liggins.

Heron made a Jordan-esque move to get the Riders going in style, dropping Liggins in the midrange before pulling up and making it off glass for Leicester’s first points of the game. The ankle-breaker kickstarted a 9-0 run, with the Riders bolting out to an early lead.

During this run, Leicester put on a show, with Nelson-Henry taking up playmaking responsibilities to throw a lob up to the high-flying William Lee. Lee dominated the game in the first quarter, scoring buckets in a multitude of ways in a versatile offensive display. He took his defenders off the dribble, threw down a lob and nailed a three from outside on his way to nine first-quarter points.

Despite a dominant Riders stretch, Kevin Ware’s insertion into the game swung momentum back in the Lions favour. Ware, best known for his shocking injury in the 2013 NCAA championship elite eight for Duke, injected energy into his side, pushing the pace to get London quick points in transition. With London’s offensive clicking after a tough start, the first quarter ended close, with the visitors holding a tight 21-20 lead.

In the second quarter, Heron got the bench of its feet for the second time in the game. He flew through the air for a monster putback jam off a Conner Washington missed three, to reclaim momentum for his team in a back and forth affair. The Riders took an eight-point lead midway through the second, their biggest of the night.

With the Riders jumping out to a lead for the second time in the game, London once again climbed back into contention. A 13-3 Lions run, led by Justin Robinson, put the Lions up two, and Conner Washinton’s free-throws called an intense first half to a close, with the teams tied at 44.

The second half began as the first one ended, with Leicester never able to capture any real momentum before being pegged back by the Lions. The league’s two best offences managed 26 points between them in the third quarter, as both teams locked down defensively. The defensive pressure from both sides was suffocating, with neither allowing their opponents an inch of breathing room. The Lions led by two coming into the final quarter, setting up yet another thrilling conclusion, as has been the trend for the Riders over the course of the last month.

In the fourth, the Riders fell back on the foundation of their league-leading season, their defence. Their help defence at the rim was stifling, coming up with three blocks in the first three minutes to deny access to the rim. The defensive efforts earned Leicester a tight lead, as the Lions called timeout with 3:23 remaining, the score at 67-65 in the Riders’ favour.

The game fell on a huge defensive possession from the Riders, playing defence to the highest standard to force a shot clock violation out of the Lions. Another elite display of defence forced London into a miracle made bucket at the buzzer, as ex-tennis pro Josh Ward-Hibbert made a contested jump shot over the outstretched arm of Washington to bring his team within three.

With the clock ticking down, the responsibility fell on the captain to bring the game home. With 3.5 on the shot-clock, and 17 seconds remaining in the game, Nelson-Henry came up with a huge putback to make his third basket in the final three minutes, sealing the game for the Riders.

The Riders win could be season-defining, as they get one over their closest league rivals. They go eight points clear at the top of the BBL, with a 16-3 record. They host Surrey on Wednesday, hoping to further stretch their lead at the top of the table.