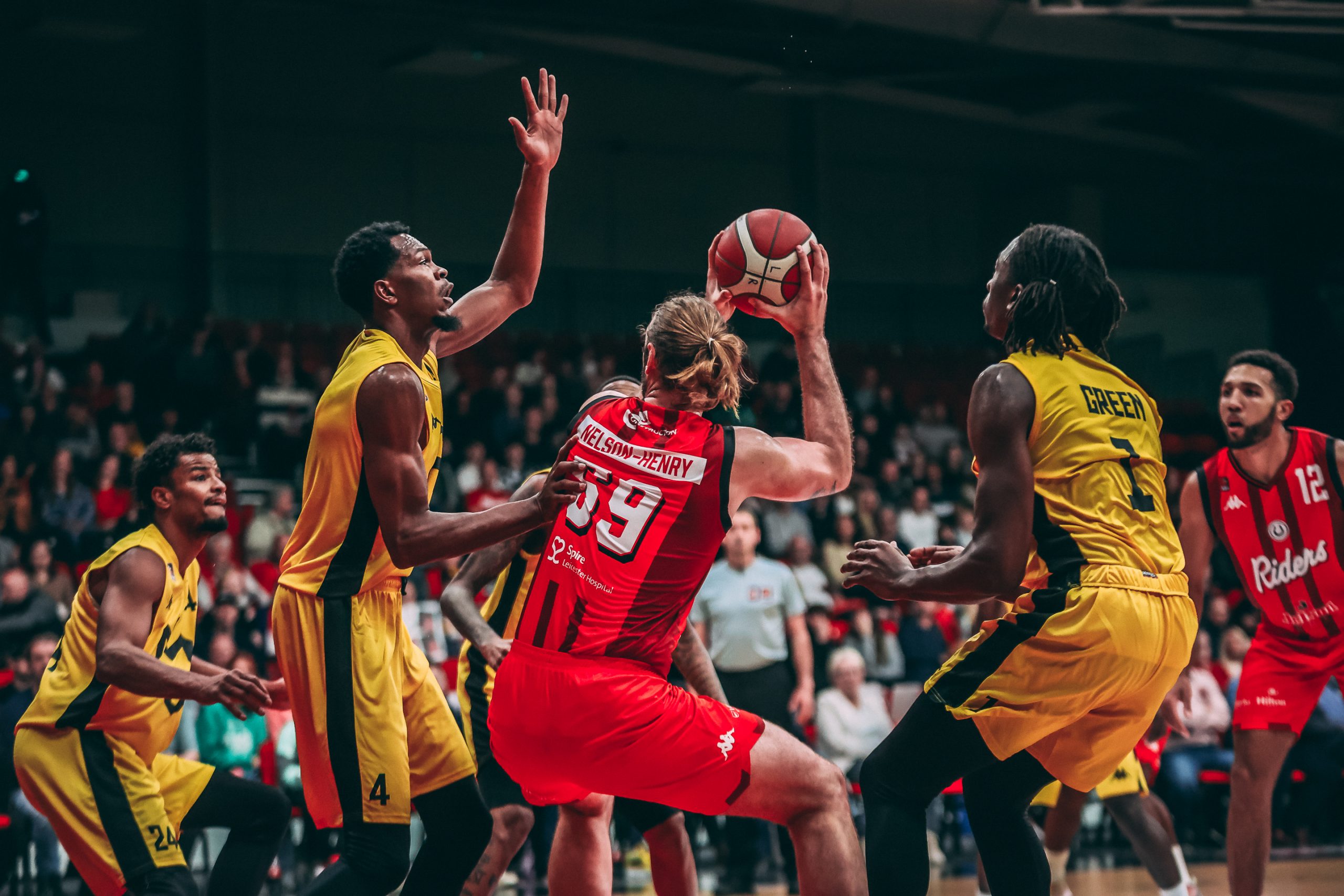 The Riders move to 2-2 after winning their home opener. It was a 102-89 against the Manchester Giants, which they blew open in the third quarter.

The Riders’ wing tandem led them through the game, as GB guard Patrick Whelan and Omaha graduate Zach Jackson scored 20 each. Jackson also grabbed 10 boards, putting up a monster double-double after missing the last two games through injury.

The Riders cooked from deep, scoring 48% of their three-point attempts. They shot 56% from the field in an efficient shooting night. They showed their depth of shooting, as seven players contributed from behind the arc.

The Giants fought from wire to fire, coming back multiple times to keep the Riders on their toes. By halftime, Rahmon Fletcher, William Lee and Tahj Green scored double-digit points, but the visitors could not keep up with Leicester’s offensive effort.

After a slow start, falling into an 11-2 hole, two quick threes from Jackson and Conner Washington clicked their offence into gear. Jackson exploded for seven points in five minutes in his return to the lineup.

Leicester got back into the game from deep, as threes rained for the hosts. They made five in the first, and shot 56% from the field to take the lead with two minutes remaining. The Riders rode the wave of momentum into the second and maintained their shooting form. Back-to-back threes from Jackson and Kimbal Mackenzie stretched the lead to 11.

The Giants fought back, as their leading scorer, Green, strung together some baskets. His putback, which followed a deep three, cut it to one possession. The teams traded buckets before Whelan hit a shot at the buzzer to make it 53-49 at the half.

Three minutes into the second half, Whelan kept firing with his hot hand to drain consecutive triples. He scored eight straight points to rebuild the Riders’ lead, as they look to reestablish their foothold in the game.

They kept their foot on the pedal, continuing to get points on the board to make it a 19-point affair. Three Corey Johson free-throws to close the quarter cut into the Riders’ lead, but they still held a significant advantage after winning the third period 30-18.

The Giants showed heart in the fourth, crashing the glass on every possession to score second-chance points. With five minutes left in the tie, they’d cut the game to 12 points following a Lee jam.

They went to their captain to settle the nerves. Darien Nelson-Henry took the ball down low, backed down Lee and hit a smooth fadeaway at the buzzer to regain control of the game.

After Nelson-Henry’s bucket, the Riders were able to see out the game, going 11-7. Jackson’s midrange jumper rounded off a professional Riders performance.

“It was great to be home. We were all looking forward to playing in our home arena. We’ve had great success here, and the guys were fired up to play,” said coach Rob Paternostro after the game.

On Jackson’s performance, he said “He’s such a great team player and competitor. He’s not 100%, but he told me yesterday ‘I’m going to play.’ You never have any doubts about Zach Jackson!”

The Riders play the second of a doubleheader, heading to Glasgow on Sunday to take on the Caledonia Gladiators. They look to move to a winning record, before returning home next Friday to host the Flyers.