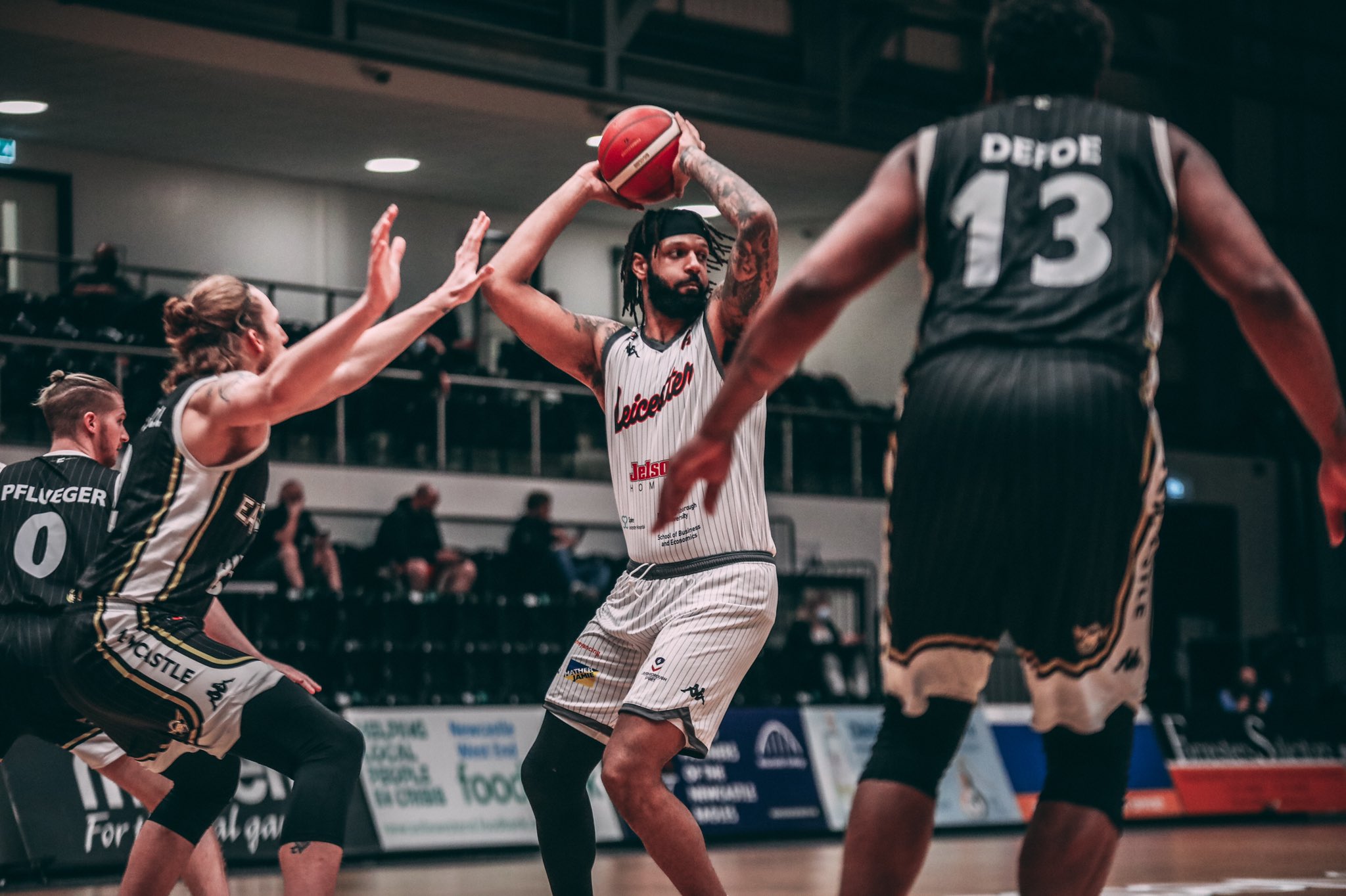 The Riders lost a hard-fought contest, falling on the road to the Newcastle Eagles 90-80. A competitive tie between long-standing rivals came down to the final minute of play, but a monumental second-half performance from Newcastle overcame an 11 point Riders halftime lead.

Leicester had contributions from every player on the court, led by a 16 point double-double off the bench from Geno Crandall. The MVP candidate had 10 rebounds in the game, and nine by the half, fighting until the final buzzer to keep the Riders in contention. Ali Fraser enjoyed a solid game, scoring eight points in 13 minutes for the Riders to contribute towards 38 points off the Leicester bench.

The BBL’s most efficient team, the Riders had success putting the ball in the hoop, shooting 48% in the game. However, turnovers proved costly, as they gave the ball up 24 times to allow the Eagles 22 more shots than the visitors.

The Riders dominated the first two quarters, forcing the league’s most frequent assist makers into isolation offence. Newcastle shot 28% in the first half, dishing just eight assists despite entering the game averaging 24.1 a game. In the second half, the Eagles came out with a different intensity, stepping up on the defensive end. Their efforts secured the lead, which they would not surrender.

The Eagles had two players with over 20 points, as Justin Gordan and Rahmon Fletcher combined for 47. Fletcher, who is making his bid for his third BBL MVP this season, led the Eagles on a run to beat the Riders 32-17 in the third quarter, which was ultimately the difference between the teams. Clutch baskets down the stretch from Gordan sealed the Newcastle victory, including a monster jam to put them up five with a minute left.

Newcastle, who lead the BBL in steals with 8.7 a game, stole the ball 14 times to generate 25 fast breakpoints. 16-year Newactsle veteran Darius Defoe was one of three Eagle players with three steals, dominating the defensive end to block three shots also.

Against the league’s best shot-blocking team, Newcastle remained true to form, as they scored 56 points in the paint, compared to their league-best 41.8 a game. Their 90 point performance is the tenth time they have amassed that total this season, as they boast the BBL’s second-ranked offence.

Early on, Leicester flexed their defensive strength, holding the Eagles to just two points in the opening five minutes. The Riders suffocating start allowed them to bolt out to a double-digit lead. Lee’s six points lead Leicester through the first period, as he put an exclamation point on an emphatic start. Left open in the corner, Lee cut hard to the rim to receive a dish from Geno Crandall, before slamming it down two-handed.

Having established their lead in the first, the Riders continued their superiority to build a 15 point lead. Darien Nelson-Henry dominated down low, scoring nine points in the quarter and blocking Fletcher’s layup to end the half. The Riders held their opponents to 31 first-half points, entering the locker rooms up 42-31.

The Eagles commenced a colossal comeback coming out of the half, forcing seven Riders turnovers in the opening five minutes of the third. Eight quick points from Flecther gave the Eagles their first lead since the game’s opening basket, after an 18-4 Newcastle run. Louis Sayers caught fire for the Eagles, knocking down four threes in the quarter as the game’s momentum flipped. After 31 first-half points, Newcastle scored 32 in the third quarter to take a narrow lead. The sides entered the final quarter with the Eagles up 63-59, laying the foundations for a climactic finale.

Riding a wave of momentum generated in the third quarter, the Eagles maintained their lead in the fourth. With four and a half minutes to play, Newcastle found themselves up nine courtesy of Fletcher attacking the rim. With his team in need of a basket, Mustapha Heron drove coast to coast to hit a tough layup over Defoe, before Crandall stripped Fletcher for a breakaway slam to bring the game to within a possession.

With three points between the teams, Gordon brought the game home for the Eagles. He swung momentum in his team’s favour, coming up with a huge play by rising high to throw the ball down over Heron. On the next possession, he drove to the hoop and hit a running hook shot to put Newcastle up six. While the Riders hung in the tie, coming up with a steal and a quick Crandall jam to make it a two-possession game, the late surge fell just short of accomplishing a Riders comeback.

Despite the loss, the Riders still top the BBL Championship table with a 22-5 record. By beating the Lions in their next fixture, they can secure the league title for the fifth time in franchise history. They travel to London on Wednesday in the hope of accomplishing that feat.