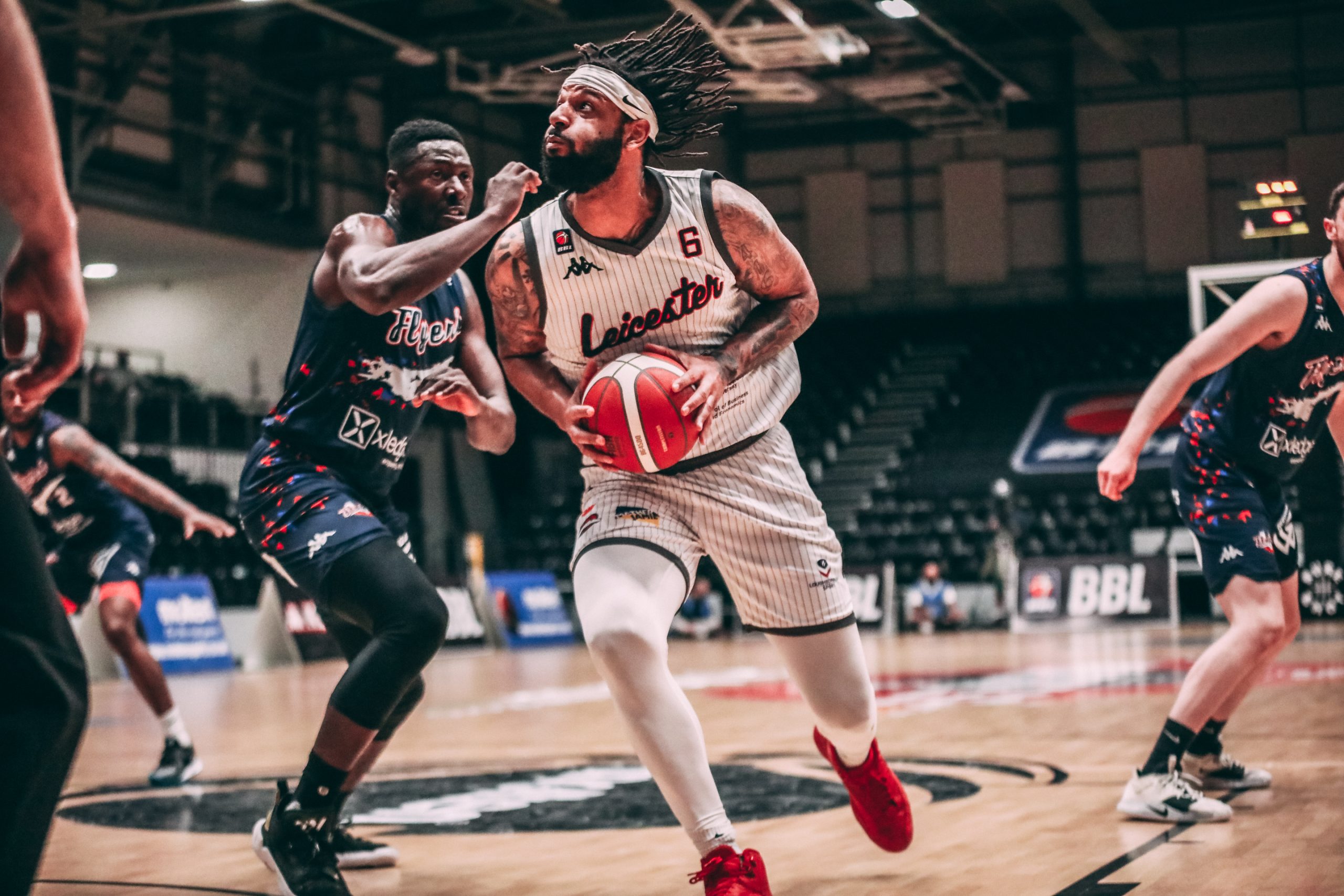 The Riders kicked off May Madness with a bang, dominating the first leg of the quarter-final to beat the Bristol Flyers 85-56. A commanding second half, which Leicester won 52-26, puts them in a strong position entering the second leg on Wednesday. Geno Crandall enjoyed a tremendous double-double with 21 points and ten assists, leading the team in both categories.

With the BBL’s best rim protection, blocking 3.1 shots a game, the Riders forced Bristol to take outside looks, of which they made just two of their 23 attempts. William Lee was an imposing presence in the paint, swatting five shots, including two colossal blocks on Eric Lockett and Raphell Thomas-Edwards. Compiling highlights on both ends, Lee threw down a monster alley-oop from Crandall’s lob pass during a 17-2 Riders run in the third, which allowed them to jump out to a substantial lead.

A team effort saw the Riders to a blowout win. They had five double-digit point contributions in the game, as they dominated in the paint. Leicester’s big-men shot 20-25 from the field, with Mo Walker enjoying a statement game. Coming off two long term injuries, which sidelined him for the better part of two seasons, Walker was back to his brilliant best, making seven of his eight shots for 16 points.

Through the first two quarters, it was a close encounter between two top-four BBL defences. Led by Lockett, who scored 15 of the Flyers 30 first-half points, Bristol kept the game within a possession until the half. Unable to keep pace with Leicester, the game got away from the Flyers in the second half, as the Riders held Locket to one point. Yet they will take the positives of the early stages into the next leg.

Bristol could find these positives in the tightly contested first quarter, which the Riders won by just one. The period was fought in the paint, with 27 of the 32 points scored coming at the rim or the free-throw line. Despite the Flyers’ competitive start, the quarter’s highlight came from Lee, who dominated early with four rebounds in five minutes and a monster block. The University of Alabama’s all-time leading shot-blocker rose high to meet Lockett at the rim before swatting his layup out of bounds.

Lockett took over the early stages of the second quarter. He kept his side in the fixture, scoring eight straight points for Bristol. An immense dunk kick-started his run. He glided through the air on the fastbreak before throwing the ball down one-handed. Lockett concluded a low scoring half, stringing a shot from midrange to cut into the Riders’ slight lead. The teams entered the locker rooms with the score 33-30 in Leicester’s favour.

The Riders established their first significant lead of the game in a fast-paced beginning to the third quarter. Two threes in quick succession put them up 12, as Leicester scored 18 points in the opening five minutes of the period. Lee stamped the exclamation point on an emphatic Riders run, linking up with Geno Crandall for a lob. Crandall went between his legs before lobbing the ball up high from beyond the arc, as Lee jumped out the arena to catch it and throw it down with authority.

The Riders won the third quarter 32-15, led by 11 points from Lee. Lee claimed his second colossal block of the game to end the period. It was Thomas-Edwards on the receiving end on this occasion. He drove inside and threw up a layup, before Lee helped from the weak side to rise high above everybody and swat it away, ending the quarter with his team up 65-45.

In a two-legged tie, the final quarter remained vitally important to the Riders, despite holding a 20 point lead. Crandall joined the game’s lengthy highlight reel to continue his team’s momentum, breaking Daniel Edozie’s ankles with lightning-fast handles. Taking the big man off the dribble, Crandall stepped back to cause Edozie to stumble, before taking the ball to the rim and drawing a foul.

To see the game home, Walker scored nine successive points to the delight of the Riders bench. Walker’s run put Leicester up 29, a lead they would maintain until the buzzer.

The win puts the Riders in good stead for the second leg on Wednesday 5th May. Coach Rob will insist to his team that the job is not finished. The University of Worcester Arena will host the second fixture, with the Riders hoping to progress to the BBL Playoff semi-finals.