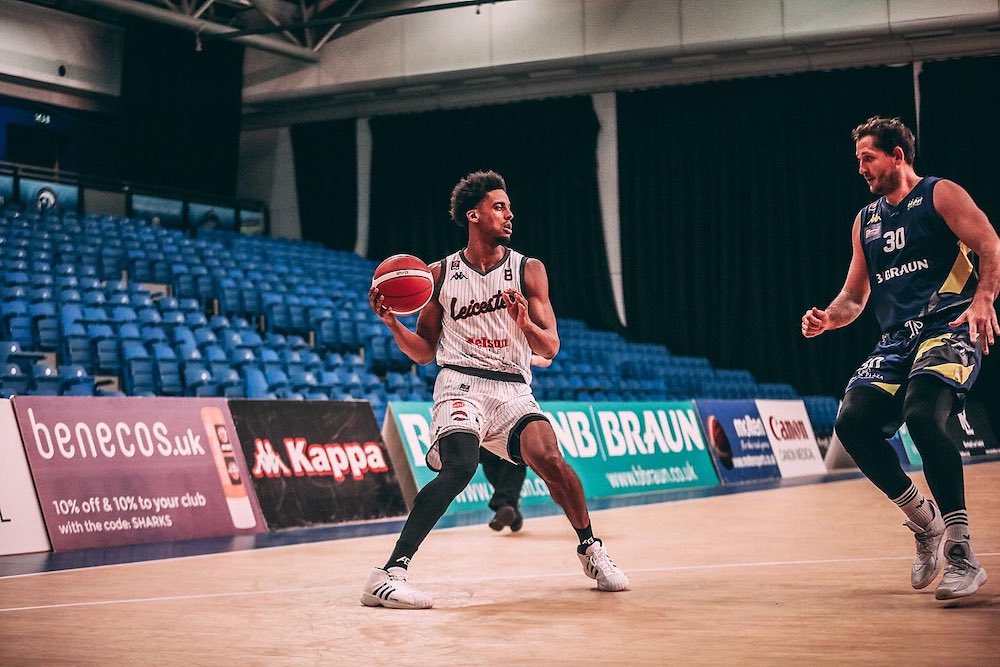 Riders bounce back with a win in Sheffield

Riders responded to their BBL Trophy loss to the Lions on Friday in emphatic fashion, putting up 107 points board as they defeated the in form Sharks. It was a clash between the two best-ranked defences in the league, however, the game developed into a high scoring affair, ending 93-107. This marks the third BBL Championship match in four in which Leicester have scored 100+ points, with their offence clicking into gear of late.

The Riders shared the love in this Valentine’s day game, with contributions from all over the floor. Seven Rider players scored nine or more, and three scored 19+ points, as Darien Nelson-Henry led the team with a season-high 23. Coming off the back of a 16 point game in the loss to the Lions, Corey Johnson continued his hot shooting form with 19 points, going five for eight from three, while Geno Crandall continued to perform in his first BBL season with 20 points. ‘General’ Geno commanded the offence, and finished with a game-high eight assists, running the offence to great effect.

The Riders were quick out the gate, jumping out to a 31-18 lead by the end of the first quarter, through success feeding the ball to Nelson-Henry. He had ten first-quarter points working down in the low-post, showcasing his impeccable footwork and finishing ability at the rim in a battle with 12-year Shark veteran Mike Tuck. Leicester also did a great job getting to the free-throw line in the early stages, attacking the rim and drawing fouls. They had 16 in the first half, making them at an efficient rate, shooting 93%.

The Sharks trailed by as much as 21 in the first half, but climbed back in the game, bringing the score back to within single digits. Jeremy Hemsley put his team on his back early, with 17 points by halftime. The first-year pro out of San Diego State finished with 21, and his teammate in the backcourt, Antwon Lillard, carried the load in the second half to keep the game close. Lillard, who is averaging 15 points on the year, led the game in points with a season-high of his own, finishing with 23 and going eight of 12 from the floor.

Despite the Sharks coming out strongly in the second half to cut the game to seven, the Riders weathered the storm and responded with a run of their own. William Lee had his usual flurry of highlight plays to swing the momentum in the Riders’ favour, throwing the ball down hard on the fast break causing a break in play for the rim to be fixed. Later in the quarter, Conner Washington threw up a lob which Lee climbed to the rafters to catch and throw down to put the Riders up 12 with three minutes left in the third.

Sheffield continued to compete in the fourth through Kipper Nicholes, who had 10 points in the quarter. They cut the game to nine, but key baskets down the stretch for the Riders kept the Sharks at arm’s length, staving off any threat of a comeback.

The Riders win takes their record in the BBL Championship to 11-1 with Newcastle to play on Wednesday Evening at the Morningside Arena. Meanwhile, the Sharks now sit with a 7-6 record, as this loss ends a three-game winning streak for the South Yorkshire side.