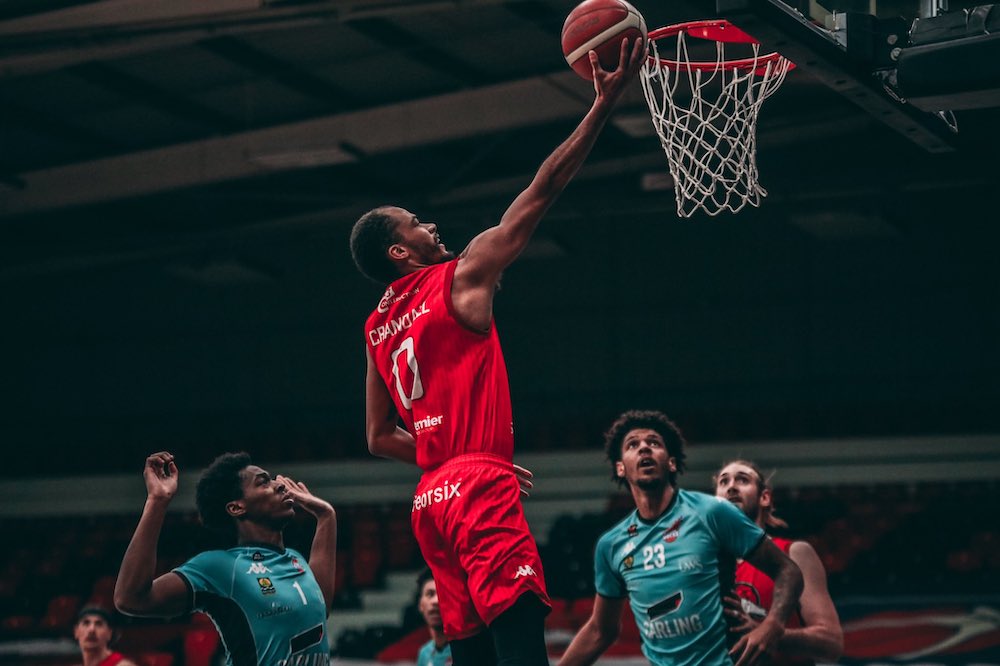 Riders blow out Rocks in a fine display on Sky Sports

Leicester Riders dominated Glasgow Rocks in the BBL Championship, easing to a 90-58 victory at the Morningside Arena in front of the Sky Sports cameras. Riders took the lead in the third minute of the game and never looked back.

Riders’ best in the league defence held the Rocks to just 34% shooting from the floor, while they shot 56%, including an impressive 14 three pointers from 27 attempts.

Riders also moved the ball again extremely well, dishing out 27 assists, to just thirteen from the visitors, as they continued their fine start to the Championship, with just a single loss so far, matching top of the table London Lions in that category.

Riders started slowly, missing a series of close in shots before Zach Jackson got the home side going with a three. Geno Crandall penetrated for a driving lay-up giving Riders an early 5-4 lead, but the defences were on top. Corey Johnson then hit a long three and that opened the floodgates for the Riders. Nelson-Henry got untracked inside, Crandall spun through the defence with ease, and the Rocks were forced to a timeout, trailing 14-4 midway through the first quarter. But that did not stop the rot for the Rocks, and back-to-back threes from Jackson and Conner Washington threatened a rout, with Riders building a 23-4 lead. But Glasgow’s Marc Kwedi finally hit a three and that sparked a ten to nil run by the visitors, who trailed 23-14 after the first quarter.

The start of the second period was going to be crucial to sustain Rocks comeback, but it was another Johnson three that triggered an offensive burst by Riders. Former Rock Ali Fraser and Aaron Falcon got in on the act as part of a Riders 9 to nil run, forcing Rocks to another timeout, trailing 32-14.

But it was Riders who came out of the break on fire with Washington and Falzon hitting consecutive threes, and Jamell Anderson producing consecutive baseline drives, and with another dunk by the Riders England forward the home side was good value for a 48-22 halftime lead.

Nelson-Henry got Riders going in the second half, with a couple of inside scores that kept the pressure on the Rocks.  Kwedi hit another long three but then Crandall lit up the Arena with a huge dunk off a breakaway drive. Jackson followed that up with a three and Riders were cruising 57-27 with just under seven minutes in the quarter.

Kwedi responded with another long three, but generally the Rocks were struggling to find an open man as the Riders defence maintained it relentless pressure. Johnson hit another three, and then Crandall drove through the middle of the Rocks defence for another monster dunk and the Riders lead grew to 68-34. It took a Johnny Bunyon three on the buzzer for Glasgow to pull back the score to 70-41 with the final period left.

Falzon cancelled that out with a three of his own to start the fourth quarter, and Anderson hit one of his trademark threes from the corner to push Riders 76-43 clear. From then on, the Rocks tried to rattle the home side with aggressive defence, picking up a couple of unsportsmanlike fouls along the way, but Riders maintained their composure to come out on top with plenty to spare.

Johnson was Riders top scorer with 20 points, including five of nine three pointers, and he added 8 rebounds and 4 assists for good measure.

Crandall did all he needed to with 10 points, 7 rebounds and 4 assists while Jackson was perfect from beyond the arc with 3 three pointers in his 13 point contribution.