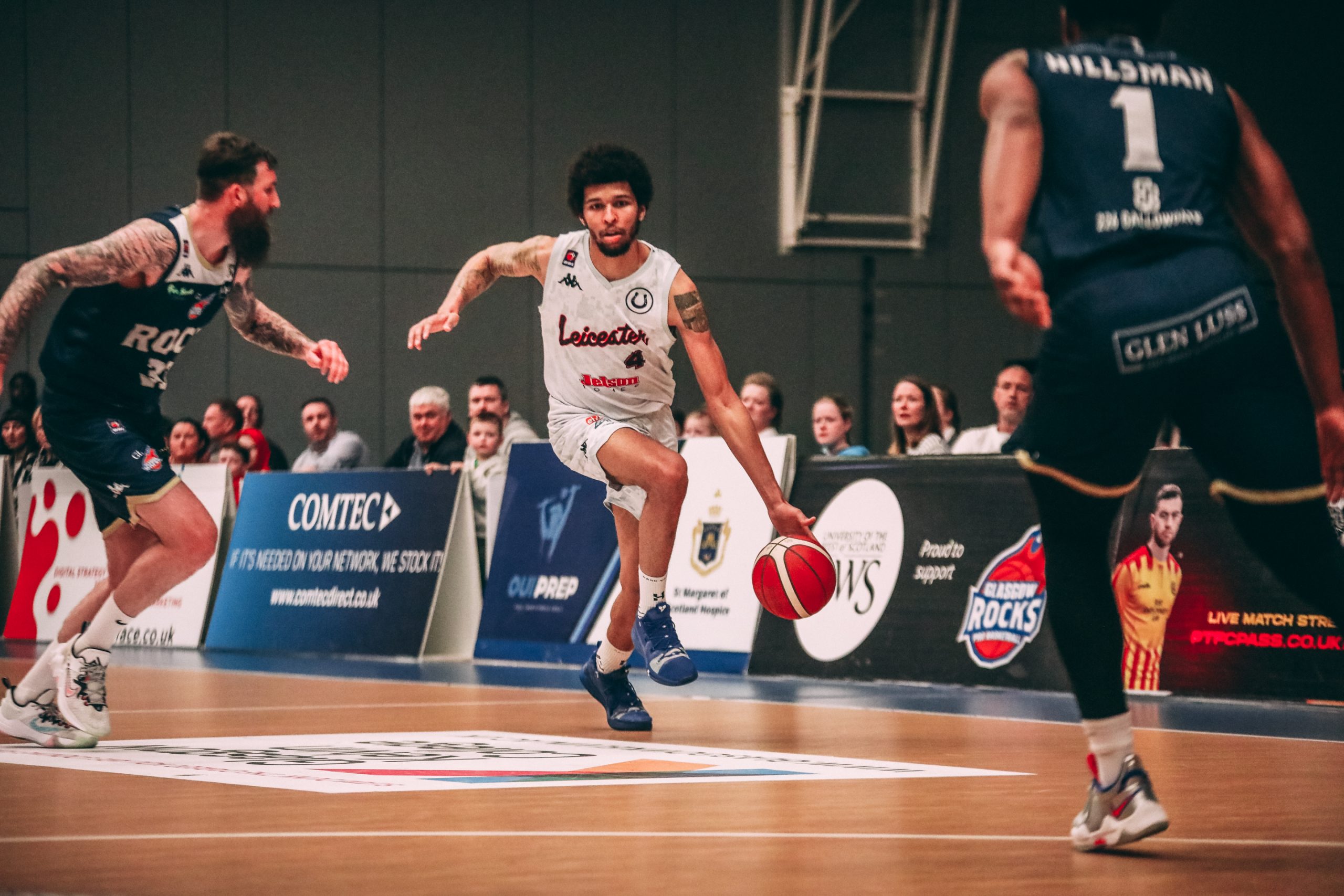 Riders beat Rocks on the road

The Riders won their final road game of the league season, beating the Glasgow Rocks 101-86. Having previously wrapped up the league title, the win is crucial for maintaining the team’s winning rhythm.

Leicester’s tandem of Mo Walker and Kimbal Mackenzie combined for 32 points off the bench, with Walker leading the team with 17 points. Mackenzie’s 15 points and six assists marks his best statistical performance of the season, as Glasgow’s defence found no answer for the Canadian.

The lead rose to as much as 27 points before Glasgow’s late flurry of threes cut the game closer.  After taking a double-digit lead in the first half, the Riders controlled the game until the final buzzer.

They shot 54% from the field and dominated the glass, doubling their season average with 14 offensive rebounds. Leicester had 11 different scorers, five putting up double-digit points, as coach Rob Paternostro split the minutes and the offensive load.

The win improves the Riders’ record to 24-2, as they extended their winning streak to eight. The Glasgow loss dents their recent hot form, as the hosts entered the game having won nine of the last ten fixtures, and casts doubt on their playoff hopes in the process.

Glasgow’s Jordan Harris led the game with 19 points in his side’s defeat. The first-year pro out of the University of Georgia went 9-13 from the field and used his elite athleticism to create a multitude of highlights at the rim.

There was little to separate the scoreline through the opening period, as the sides felt their way into the game in the early stages. There were seven lead changes in the first quarter, one just one point in it with eight minutes gone.

The Riders closed out the first with a 9-2 run, earning an advantage to end the period. Walker made the difference off the bench, getting to work down low as his matchup, Vance Johnson, picked up two early fouls.

The Rocks fought back, with Vance Johnson and Jordan Johnson making up 18 of the team’s 22 initial points. Vance Johnson had nine points and six rebounds in a dominant first quarter display.

But the second period belonged to Leicester, as they kept their opponents at arm’s length until the half. BBL MVP Geno Crandall turned up the style, handing-off an audacious 360 dish to Patrick Whelan down low to make it an 11 point affair.

Whelan led the Riders into the locker rooms after a 13-point second quarter. The score was 53-44 at halftime, leaving Leicester in a commanding position.

The Riders started the second half testing a new lineup, playing three guards in Crandall, Mackenzie and Whelan. Mackenzie rewarded his coach’s decision, draining a three to get things underway.

Another three from the Bucknall graduate five minutes into the third gave the Riders a 14 point advantage, their biggest of the night. The Rocks, led by six quick points from Harris, chipped away at the lead, cutting it to single digits. However, the Riders remained in control, responding to Glasgow’s blows with big shots of their own.

Leicester ended the third with a 13-0 run, led by eight more points from Walker. His three ended the quarter with the Riders leading 83-61.

With Leicester up 23 in the fourth quarter, Loughborough and Charnwood’s Louie Jordan and Evan Walshe checked into the game to log key BBL minutes. Both got on the scoresheet quickly, with Walshe driving to the hoop before making a tough finish for two, before Jordan drained a three from the corner.

The Riders return home for the league finale on Friday. They face the Plymouth City Patriots, hoping to maintain their rhythm entering the postseason.