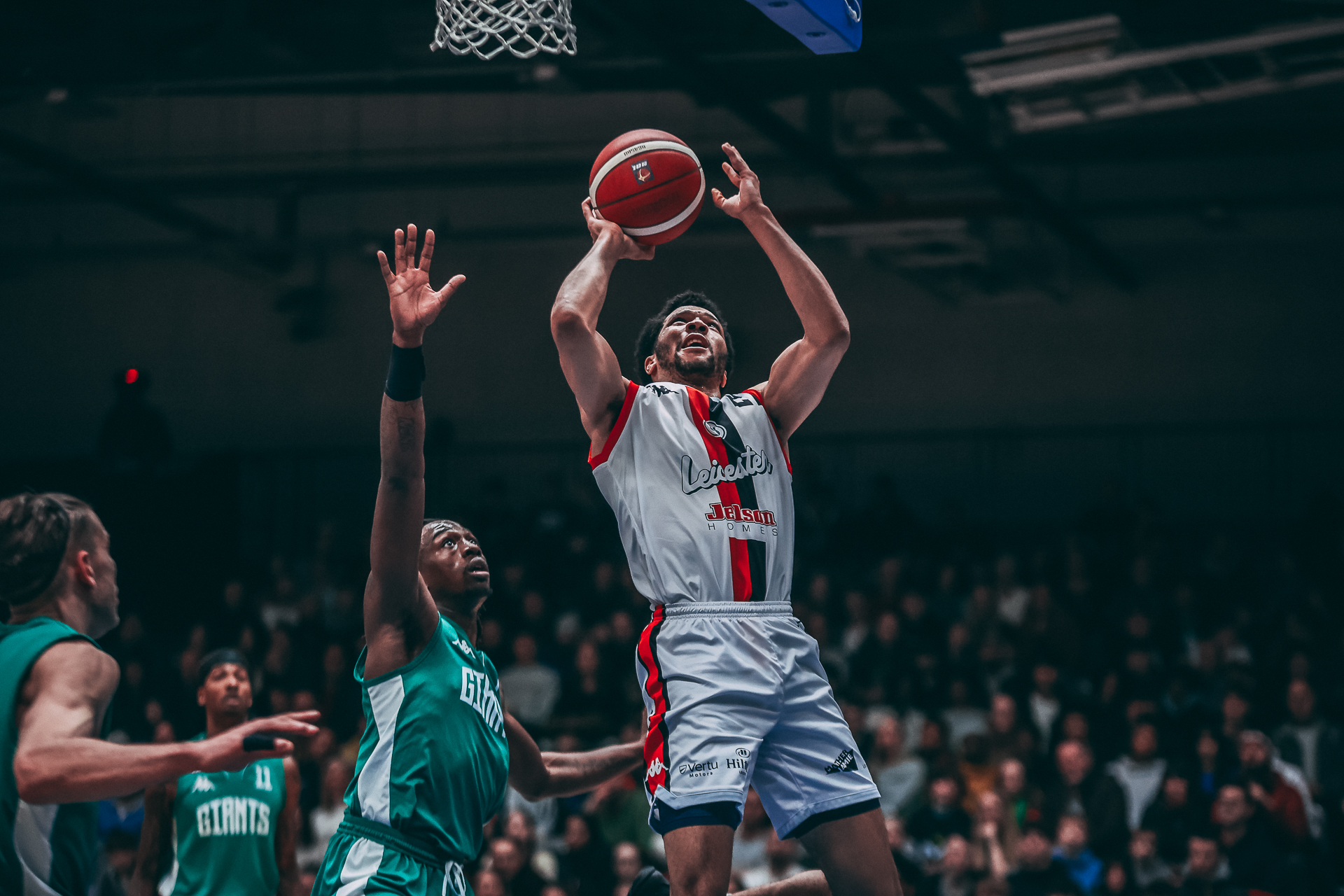 The Riders moved to the top of the BBL Championship table with an 89-82 overtime thriller against the Manchester Giants.

The teams were locked at 75 after four quarters, but the Riders saw out a clutch win led by 21 points from Zach Jackson.

Kimbal Mackenzie led the team in overtime with five points, stepping into the starting five following Derryck Thornton’s absence. His clutch free throws sealed the win late, after his ice-cold corner three to make it a two-score game.

The win improved Leicester to 11-4 on the season, putting them top of the league table for Christmas.

Marc Loving supported Jackson with 19 points and 11 rebounds, while Mackenzie bagged a season-high 15 points. The Riders shot 36% from the field in the game, but they found a way to “win ugly”, in the words of Mackenzie after the tie.

The Riders had one day of rest to prepare for the fixture but found enough in the legs to see it out. “Great teams win these games” was the message from coach Rob Paternostro to his team going into the extra period, and Leicester found a way to win it.

The Giants got off to an energetic start, hitting two quick threes to jump out to a six-point lead. The Riders recovered quickly, getting to the hoop effectively to take an 11-9 lead, with four Riders starters getting on the board in four minutes.

The opening period was played at an electric pace between two heavy-hitting offences. Whelan had the best first quarter of any player, scoring seven points to lead the Riders to a narrow 21-19 advantage by the buzzer.

The game continued to swing back and forth in the second, as the Riders got gritty on the offensive glass to keep the scoreboard ticking. Jubril Adekoya had two offensive boards alone to generate second-chance points, putting up seven points in the process.

It rained threes midway through the second, as the sides traded bombs from deep. Marc Loving hit back-to-back deep shots, before Kimbal Mackenzie followed up his teammate from the corner to put the Riders up four.

Loving’s threes kicked off a 13-4 Leicester run, earning them their biggest lead of the evening after Zach Jackson’s and-one play. Jackson continued attacking the rim, running the fastbreak for a monster jam after driving past Manchester’s Nick Lewis.

Jackson got the second half underway with a triple from the wing after some fluid Riders ball movement found him open. Leicester scored back-to-back buckets to stretch their lead to double digits.

The Riders started the third period on a 13-2 run, led by a dominant eight-point stretch from Jackson. He relentlessly attacked the teeth of the Giants’ defence, getting points at the rim and at the foul line to put his team up 15.

The Giants’ caught fire to end the third, cutting the lead back down to seven by getting to the free-throw line. Tajh Green had the best of the action at the line, bagging five points.

The Giants’ continued their surge, hitting back-to-back threes to make it a one-possession game heading into the final period.

It was an intense beginning to the fourth, with neither side able to find the basket two minutes in. Loving broke the seal from the free-throw line, but the game remained within a possession with seven minutes left.

Darien Nelson-Henry amended this, getting to the line on back-to-back possessions to generate some offence for his team, cooly knocking down all of his foul shots.

Two-time BBL MVP Rahmon Fletcher reached into his bag for Manchester, making tough buckets from range to keep the hosts in contention. His pull-up three tied the game at 70 with four minutes on the clock.

Following an exchange of baskets, Adekoya’s free throw tied the game with seconds remaining. Mackenzie drove to the rim, but Green blocked his effort to send the game into overtime.

Dirk Williams got overtime underway for Manchester, hitting a three on the first possession. Loving and Whelan responded with four points between them, retaking the lead for Leicester.

Mackenzie followed up with a corner three to send the Riders fans into a frenzy, and put Leicester up two scores with two minutes left. He followed up his bucket with clutch free throws, sealing a hard-fought Leicester win.

The Riders return after Christmas to take on the London Lions in a top-of-the-table clash. A win would see them extend their lead in the BBL Championship, so get your tickets here to support your Riders!