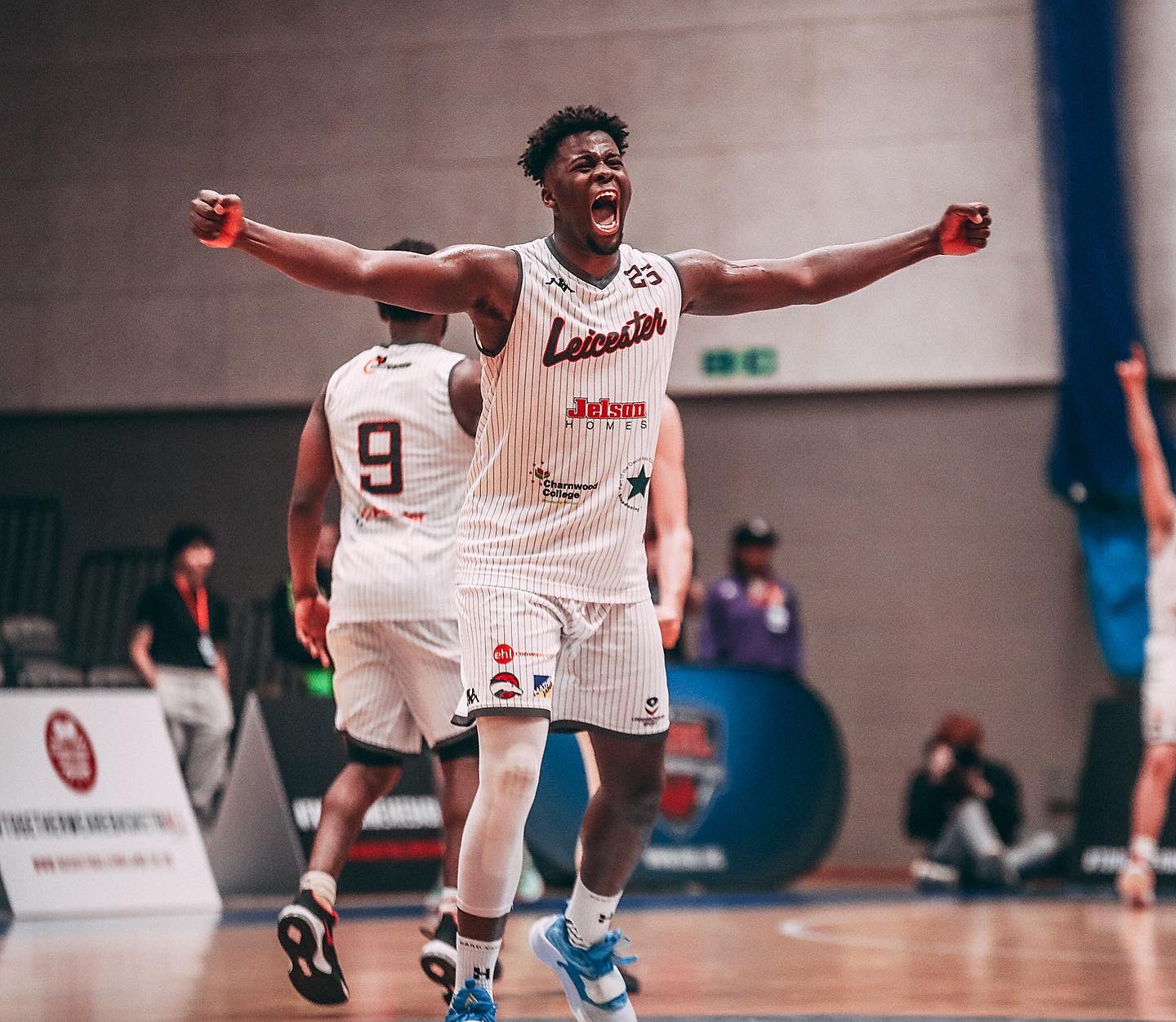 What a thriller of a game to end the season for the Charnwood Riders in Manchester! On Wednesday night the Charnwood Riders won the EABL title against Myerscough College, 83-74. Headlined by phenomenal team play and a monstrous game from MVP Victor Ndoukou with 30 points and 11 rebounds.

Difference makers Kanu Gudza (14 points and 8 assists) and Ben Woog (15 points 9 rebounds) came up huge in a gritty contested match determined by each team’s ability to keep composure under pressure and execute their schemes on both ends.

Both teams came into Manchester accompanied with a packed crowd loaded with noisemakers and energy. The game was a loud and intense battle from start to finish.

Out the gate, both teams came out quick. Myerscough struck the first blow but it was quickly answered with free throws from Victor Ndoukou. Both teams’ defensive gameplans were clear from the start, pressuring the ball and protecting the paint.

It was an even matchup, if one team scored the other would come down the other end and answer with a basket of their own. Behind a stop and a made three, Myerscough managed to take a 4 point lead with 3:33 left to play in the first, but a 9 point swing capped off with a buzzer-beater touchdown layup to Victor Ndoukou put the Riders up 5 as they entered the second leading 18-13.

Myerscough immediately hit a three to open the second and made it clear they were not going to let Charnwood run away with an early lead. Just like that, the game was back to a 2-3 point swing that could go either team’s way.

Ben Woog was massive on the offensive boards which led him to 7 second quarter points. Despite their best efforts, Myerscough were held just behind Charnwood each step of the quarter, but they did narrow the gap to 1 point going into the half. With 20 minutes left to play it was anyone’s title to win. Riders lead 38-37 at the end of the half.

The third quarter commenced and once again both teams were unwilling to give any leeway to the other. Both teams exchanged difficult shots and gritty defensive possessions. The Riders capitalized off second-chance points and were determined to out-hustle their opposition.

After another intense quarter of back and forth, the Riders found themselves up 4 with a minute to go in the third. The Riders proceeded to score 8 points in the last minute of the third. A quick three by Dan Hadley followed by a steal and layup for Lane Campbell which itself was followed up by a Ndoukou block and another 3 from Dan Hadley put the Riders up 10, 63-53, ten minutes away from a championship.

And here it was, the make or break point. 10 minutes left and everything on the line. Myerscough was not ready to give in quietly. They chipped back at the Rider’s lead to close the gap to only 2 points with 5:36 to play, but one run was answered with another and the Riders rallied back and held Myerscough to 6 points in the final 5 minutes of play compared to their 13 to take the game and the trophy.

To roaring applause, the Rider’s celebrated and MVP Victor Ndoukou received his honours to his name being chanted by the crowd as the Rider’s efforts all season paid off. It was a phenomenal effort from both teams and one of the most intense games I’ve seen with my own eyes.

A perfect ending to the season as the Riders now get to celebrate as Champions. Defined all season by their work ethic and unity as a team. They dominated on the glass and second-chance points and through their combined efforts reigned supreme. Congratulations Charnwood!