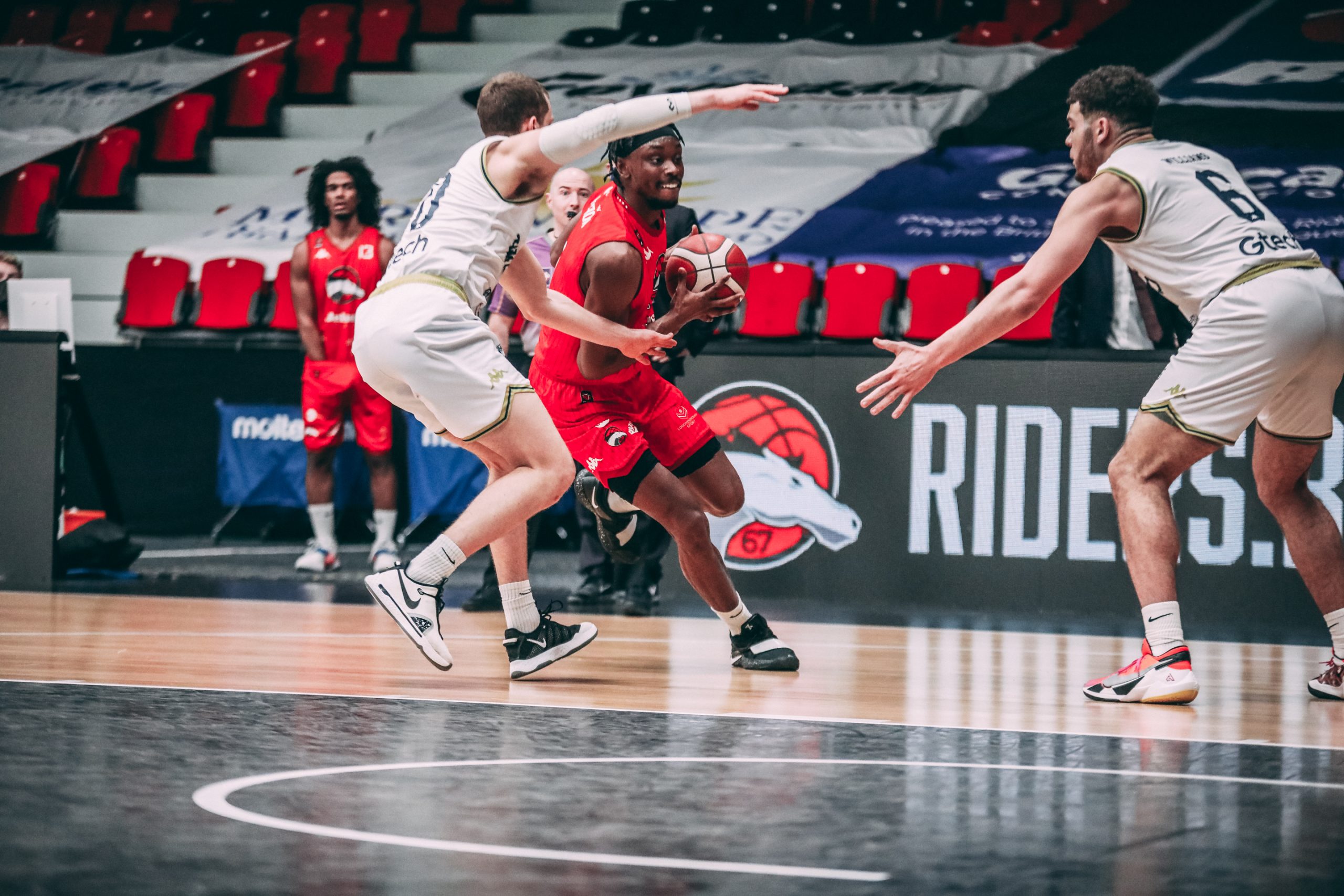 Corey Johnson came up with a huge shot in the clutch, draining a three with two seconds remaining to beat the Worchester Wolves. It was his 17th points of the night, leading the team and hitting two huge threes in the fourth quarter to keep the Riders’ 11 game winning streak alive. Geno Crandall also played well on both ends, recording a double-double with 13 points and 11 assist, along with four steals and two blocks.

It was a hard-fought game from wire to wire, with neither team able to shake the other. The game was within single digits from the tip and came down to the final shot, a real spectacle for the Sky Sports cameras. Lamarr Kimble helped the Wolves push the Riders to the end, with a season-high 24 points. He showed nerves of steal in the clutch, scoring 13 fourth quarter points, including clutch free-throws to put his team up three with less than a minute remaining.

The game was a chance for Rider fans to get their first look at new signing Mustafa Heron, who took flight to kick-off his BBL debut. His first points as a Rider coming by the means of a huge dunk over Jordan Williams on the fast break. Heron finished with six points and four rebounds in a solid performance as he settles into BBL life.

A back and forth first quarter made for an entertaining beginning to the game, with the teams matching each other’s offensive success. The Riders had their three-ball falling early, shooting three for five in the first quarter, while the Wolves had great success attacking the rim, going eight for 13 from two.

Geno Crandall took over at the end of the first, dishing a flashy bounce pass down low to Ali Fraser, before using Fraser’s screen on the next play to drive to the rim and throw it down with both hands. He scored four points with an assist in the last two minutes of the first, to send the teams in tied at 23.

The Wolves, beginning to stretch their lead, continued to attack the rim in the second quarter. Crandall’s defensive efforts, including two chase-down blocks in the quarter, kept the Riders within single digits, however, 16 points in the quarter between Lamar Kimble, Jordan Williams and Daniel Johnson-Thompson put Worcester up 6.

A timeout by Rob Paterostro with four and a half minutes left in the half stemmed the tide, allowing the Riders to switch their focus offensively and begin to work down low themselves. Hook shots from Darien Nelson-Henry and Crandall kept the game within reach for the Riders, and a Conner Washington three ended the half, with the teams going into the locker rooms with the Wolves up 46-40.

Coming out of the half, a three from Johnson followed by a quick steal and dunk by Jamal Anderson flipped the momentum in the Riders favour, down just three points early in the second half. The ball began to move fluidly through the Riders offence, as they played deep into the shot clock to find the open man.

Defensively, Leicester began to stop the Wolves from getting to the rim, cutting off the driver with help defence and forcing them into outside shots. The defensive efforts were led by intense defensive pressure from Crandall, who turned his attention to taking the ball away, snatching two steals in the third quarter. A basket from Nelson-Henry took the lead for the Riders with two minutes left in the third, for the first time since midway through the second quarter, and the teams would enter the fourth with Leicester up 60-55.

Big threes down the stretch kept the Wolves at arms length, as the Riders attempted to bring the game home. However, big late plays by the Wolves late brought Worcester back into the game. They took a two-point lead with 1:42 left in the game.

A vital score in close by Nelson-Henry with 25 seconds left brought the Riders within one, to give him for his 16th points of the night. A costly Wolves lane violation gave Leicester a chance to tie or win with 17 seconds left. Corey Johnson stepped up to knock down a huge three to give the Riders a one-point lead with two seconds left, and Maarten Bouwknecht missed a midrange jumper at the buzzer to secure a Riders win.

The win for the Riders improves their record to 13-1, stretching their lead at the top of the BBL Championship table. They are now enjoying an 11 game winning streak and will hope to continue their hot form in the second game of this back-to-back, in Worcester on Sunday.