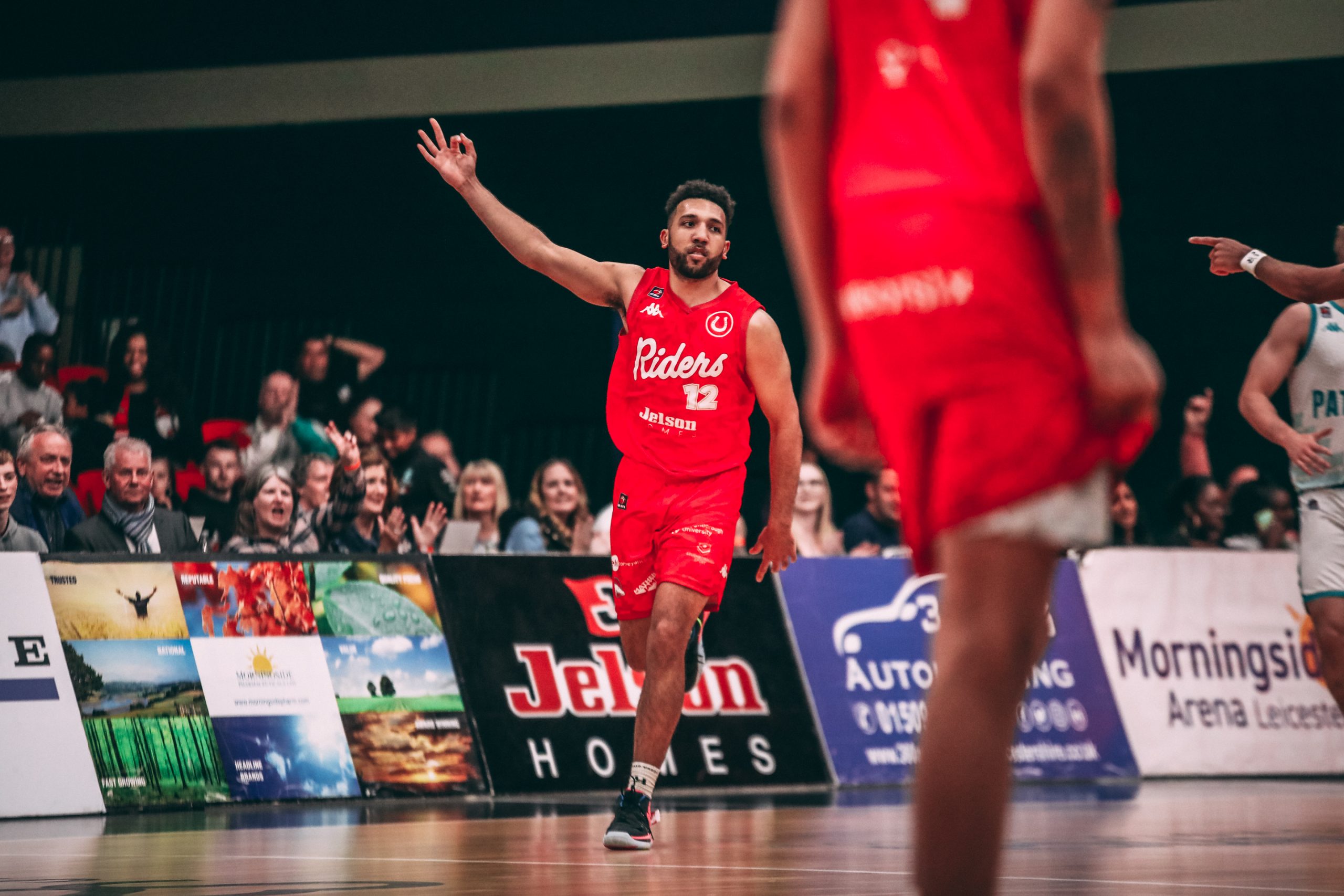 The Riders face the Plymouth City Patriots in the BBL Playoff quarter-final, over two legs. The first leg will be played in Plymouth, taking place at 7pm on Friday. The return fixture is at the Morningside Arena, tipping off at 4pm on Sunday.

The Riders enter the playoffs as the 1-seed, having been crowned BBL champions in the league season. They won the title by 16 points, the biggest winning margin in BBL history. Their 25-2 record won the league with five games to spare, as they secured the league against their playoff opponents.

The Riders are also the third team in BBL history to lead the league in points scored and conceded. They put up 91 points per contest, while giving up 72, dominating on both ends.

GB sharpshooter Patrick Whelan has led the team on the year, scoring 15.3 points per game on 48% from three, his efficiency from deep ranking the 12th best all time. The reigning MVP Geno Crandall has pulled the strings, also enjoying an emphatic season. His 13.1 points and 6.8 rebounds have been pivotal to Leicester’s success.

In their last game of the season, Leicester faced their playoff opponents, winning 92-82. Bench tandem Conner Washington and Mo Walker led the team. Washington put up a season-high of 20 points, while Walker dominated inside with 17 points and nine rebounds.

Walker saw the game as a scouting opportunity ahead of the postseason. “They’re a feisty team, they play really physical. We’ve got to do a better job in the playoffs, keeping them out of the paint and just defending better.”

Having won the BBL Cup and BBL Championship so far this season, the Riders look for the treble in the playoffs.

In their first BBL season, the Plymouth City Patriots booked their place in the playoffs. A dramatic “win or go home” game against the Newcastle Eagles, with the winner taking the final playoff spot, secured 8th place for Plymouth.

They bested the Eagles 80-72 at home, in a tense affair. It was a four-point game with a minute and a half remaining before the Patriots closed with a 6-2 run to seal the victory. Rowell Graham-Bell closed the year with a season-high 26 points and 11 rebounds, backed up by former Rider Rashad Hassan, who put up 25 points and 12 rebounds.

After a 0-8 start to the season, a Patriots’ miraculous turnaround earned them a playoff place, going 12-7 since. They get to the free-throw line the most in the BBL, and can build on their 80.6 points per game by improving their foul shooting, as they currently knock down just 70%.

Facing a mammoth task, taking on the league champions over two legs, the Patriots will rely on Antonio Williams’ scoring to challenge for the win. His 18.6 points per game in the season ranked second in the BBL, as he looks to continue his form in the postseason.

Reigning BBL and BBL Cup Final MVP Geno Crandall will look to kickstart his postseason with a win, after putting up 13 points and 6.8 assists through the season. His assist tally ranks fourth in the BBL, and his index efficiently third, as he shot 50% from the field and 39% from three.

Last season, the Gonzaga graduate pulled the strings in the backcourt, averaging a BBL best nine assists in the playoffs. His team-high 25 points, eight rebounds and seven assists sealed the league title for the Riders, and he is set to help the team through their playoff push.

Crandall is an elite offensive talent, with his flashy playmaking skills dominating highlight reels. He pushes the tempo quickly in transition to set up teammates for easy buckets, and has active hands defensively averaging  1.8 steals. With his ability to read the passing lane and take the ball from the opposition, he is a fantastic asset to Rob Paternostro’s side on both ends of the floor.

The BBL’s second-ranking scorer and third-ranking assist maker Anontio Williams has been integral to the Patriots’ playoff push this season. His 8.32 assists per game ranks 15th for a single season in BBL history, as he looks to lead Plymouth on a postseason run.

Williams put up big numbers in his last game against the Riders, with 20 points, nine rebounds and five assists. The Chicago born guard did not take a three in the game, attacking the rim to shoot 11 free throws.

Williams is a third-year pro, having spent his first two professional seasons in Estonia. The Kent State graduate scored 15 points per game in his senior year, and 17 points as a rookie.

In his first BBL postseason, Williams will look to help his team defy the odds, as they attempt to best the league champions over two legs.

The teams have faced off five times in all competitions this season, with the Riders winning every affair.

They last met in the Riders’ final game of the season, a 92-82 Riders win. Conner Washington put up a season-high of 20 points, and Mo Walker dominated inside with 17 points and nine rebounds.

For Plymouth, Antonio Williams put up 20 points, nine rebounds and five assists. The Patriots will rue missed opportunities in the game, as they shot 56% from the free-throw line.

Leicester currently possesses a 36 game win streak over Plymouth, dating back to December 2012. It is the longest winning run against an opponent in BBL history, and they look to extend it in this one.