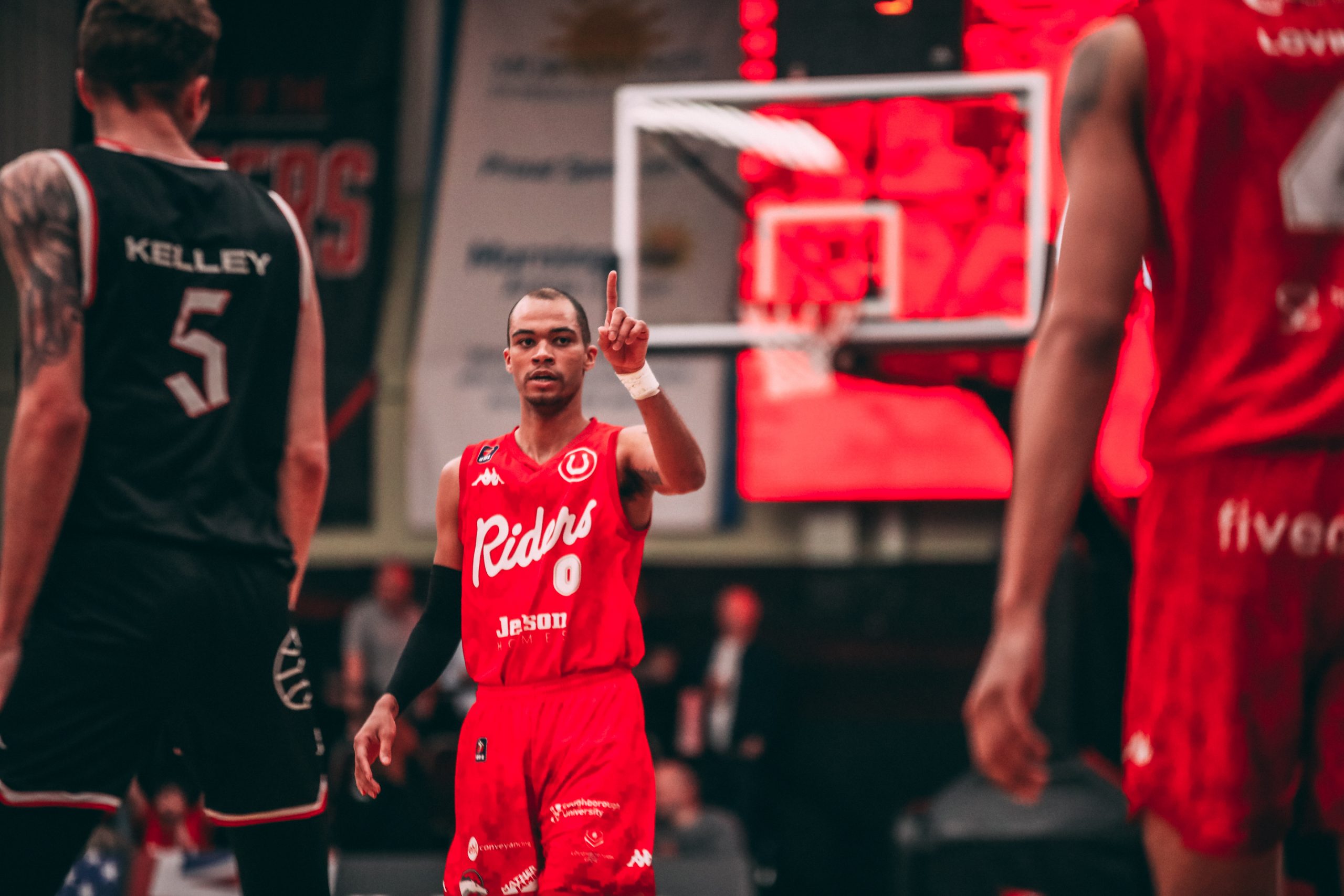 The Riders face off against the London Lions in the BBL Playoff Final at the O2 Arena! The game will take place on Sunday, tipping off at 4:15.

Road to the O2- Riders

After lifting the BBL Cup and winning the BBL Championship by a franchise-record margin, the Riders have fought their way through the playoffs in an attempt to secure the treble. They entered the playoffs on hot form, having lost just two games in the regular season to earn a first-round draw against the eighth-seeded Plymouth City Patriots.

Patrick Whelan led them through the first leg with 19 points, as the Riders earned a 15 point advantage with a 86-71 road win. The Patriots fought back in the second leg, taking an aggregate lead in the third quarter. But Zach Jackson scored 10 straight points in response before Leicester saw out the game to book a spot in the semis.

They faced the seventh-seeded Glasgow Rocks in the semi-final, who came into the tie fresh off the back of an underdog win against the two-seeded Sheffield Sharks. After a closely fought opening half in the first leg, the Riders put one foot in the final by the final buzzer, taking a 21 point lead into the return fixture behind Geno Crandall’s 32 points, 11 assists seven rebounds and five steals.

In the second leg, the Riders sealed the win in a professional display, beating Glasgow 104-78. Crandall led the team with 22 points and eight assists in 25 minutes, and Conner Washington exploded for 10 points in the fourth to log 20 points in the game, the GB guard closing out an impressive win.

Journey to the O2- Lions

London entered the postseason as the third seed, falling short of their title-winning aspirations to finish the season with a 16-11 record. They found form to end the year, winning three on the bounce as they prepared to face the Cheshire Phoenix in the first round.

They started the playoffs with a bang, beating the Phoenix by 16 in the first leg at home, led by 17 from Julian Washburn. In the second leg, Cheshire put a scare into the Lions, exploding out the gate to a 53-24 lead midway through the second. But London regained their composure at the half, fighting back to win the tie by 14 on aggregate.

In the semis, they met the Bristol Flyers, a team who had tested the Lions with close encounters throughout the season. The first leg was no different, as London edged an 85-83 win going back to the Copperbox. There was little between the sides by halftime in the return fixture, before the Lions exploded in the second half to book their place in the final. Star tandem Isaiah Reese and Dirk Williams scored 28 and 26 respectively to lead their team through the game.

To book the Riders’ place in the BBL Playoff final, Conner Washington’s season-high 20 points in 18 minutes put the game beyond doubt. The 11 year Rider shot 50% from the field and 44% from deep, putting on a vintage display for the fans.

“To come out and be aggressive is always my game plan,” commented Washington postgame. “Coming into this game, I didn’t want to hold back. I wanted to play hard defence and find my shot.”

The Bedford born point guard is a spark plug off the bench for Leicester, coming into the game off the bench to provide elite shooting, playmaking and defence. He has earned 12 trophies for the Riders in his career and was named to the BBL All-Defensive and All-British first teams in 2017.

Washington’s championship experience will prove vital at the O2. “In the final, we’ll come out and be aggressive, stick to our principles and do what we do,” said the Loughborough University graduate. “We’ve played the Lions throughout the season and know them really well. It’s going to be a great game to watch, but the main focus for us is to stick to what we’ve been doing.”

One to watch- Lions

After leading the BBL in scoring through the season, London’s star guard Isaiah Reese has been on a tear in the postseason, averaging 23 points a game. His 28 point performance was his postseason highlight so far, stuffing the stat sheet with eight assists, eight rebounds and six steals.

The 6’5” two-guard played two seasons in the NBA G-League before signing with London, scoring 8.3 points per game in his second year with the Santa Cruz Warriors. This came after a successful three-year college career with Canisius College, where he became the 38th player in the school’s history with over 1000 career points.

Reese is a bucket from deep, shooting 39% from behind the arc this season on eight attempts per game. He led the team in points and assists, dishing six a game to demonstrate his ability to score, and get his teammates involved.

The sides met seven times this season in all competitions, with the Riders taking the season series 5-2. Leicester knocked London out of the BBL Cup semi-finals over two legs in their most high-profile games of the season, and won a 103-67 blowout in their most recent game.

Geno Crandall and Zach Jackson balled out in the win, both scoring 16 points as Leicester shot 55% from three. The Lions endured a difficult shooting night, going 36% from the field and 21.2% from three, as Italian sniper Lorenzo Cugini’s 16 points led them in the loss.