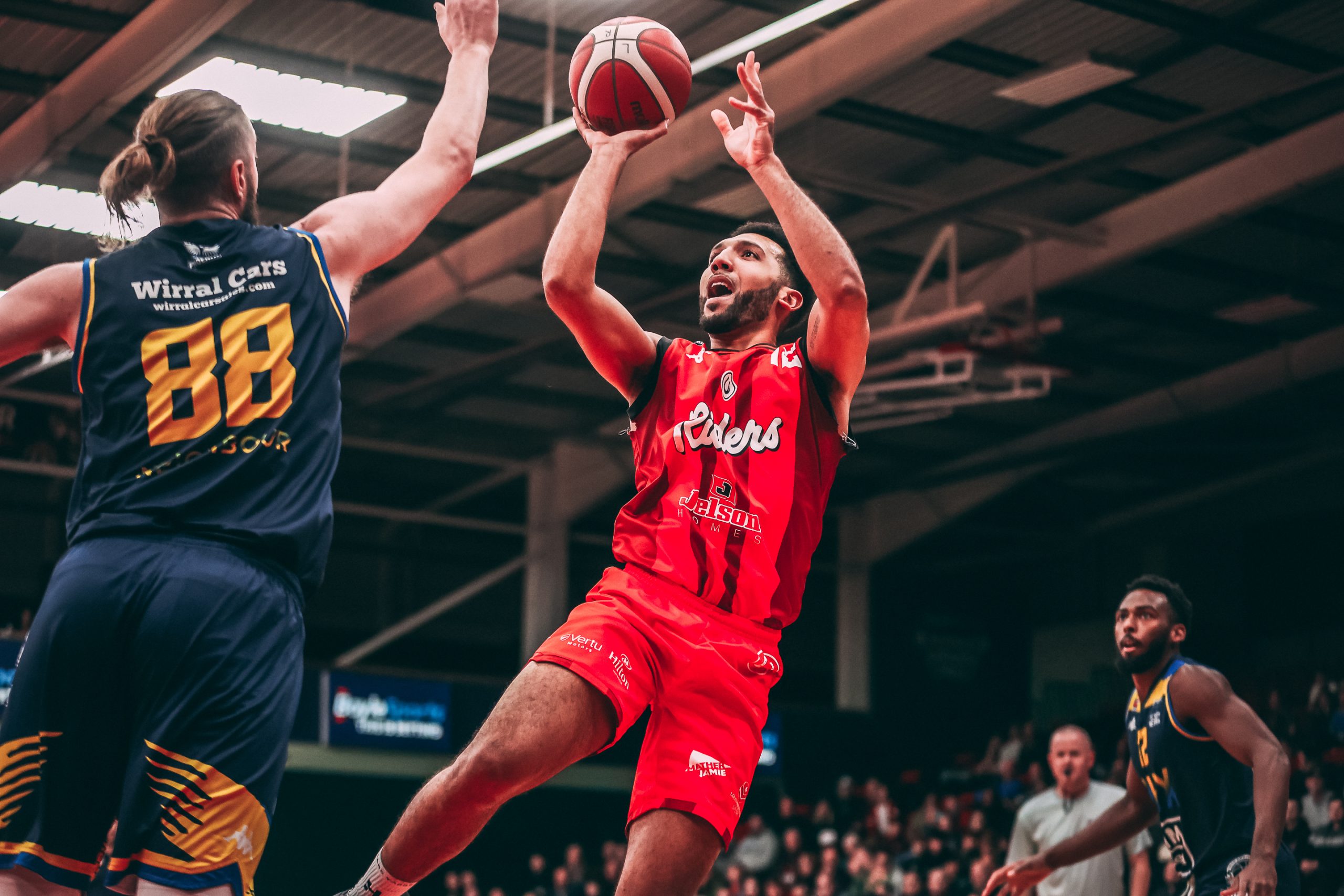 The Riders take on the Plymouth City Patriots on the road, for the second game of a weekend doubleheader. A win would improve their record to 6-3, as Leicester finds its form.

Riders rolling to the break

Going into the international break, the Riders are on a three-game winning streak. They’re building momentum for the first time this season as they look to climb the standings.

They fought wire to wire in their previous fixture against the Cheshire Phoenix, pulling out an 89-85 win. Patrick Whelan led the team with 16 points, as five Riders scored in double digits.

Read our report on the win!

“This is our third double-header in a row with a Sunday road game, which is a challenge,” said head coach Rob Paternostro after the game. “We’ve got to get some rest, recover, and give it everything because we know we have a break afterwards.”

Leicester’s offence is humming in the opening stages of the season. It ranks top two in points per game, field goal % and three-point %. They’re led by Whelan and Marc Loving’s 16 points per game, as their well-balanced offence has four players averaging 14 points.

The Riders are familiar with their opponents, having knocked them out of the first round of last year’s playoffs. They won 174-158 over two legs, going on to win it all at the O2 Arena. They will hope for some carry-over into this year, as a win on this long road trip would see them rise to second in the standings.

A solid start in the South West

A 3-3 start for the Patriots through the season’s early stages marks a respectable record, as they hope to improve on 12-15 from last year. It was chalked up as a successful season for the newly formed Patriots last year, as their record earned them the last playoff place.

But Plymouth will look to build, taking confidence from their fine form to end last season. They finished the season on a 12-7 run, turning their season around after an 0-8 start. Their highflying sensation Antonio Williams, who led their scoring last season with 18.6 points per game, stayed in Plymouth this offseason to lead them again this year.

He started the season with a bang, averaging 24 points through his first two league games. His hot form was halted, however, being ruled out with injury for several weeks. He returned in their previous game, playing just 20 minutes in his side’s 93-85 win against the Caledonia Gladiators.

Plymouth has hung its hat on making defensive plays this season, ranking top two in the league in steals and blocks. On offence, they crash the glass to secure second possessions, grabbing 12 per game.

Plymouth will look for revenge against the Riders from last season’s playoffs, with a win giving them a winning record for the first time since their opening game.

In the absence of Antonio Williams, BBL veteran Rashad Hassan has held down the fort for Plymouth this season with 15 points and 6.3 rebounds per outing. The eight-year pro, and former Rider, is playing in his fourth season in Plymouth and has been the hallmark of consistency and efficiency.

Hassan has averaged 67.2% from the field this season and has averaged over 60% in seven of his eight pro seasons. The 6’8” big enters this one having averaged 24 points and 7.5 rebounds in his previous two fixtures.

Lining up against him in the backcourt will be Jubril Adekoya, one of the BBL’s best defenders who rises to any challenge. Adekoya’s defence inside played a pivotal role in his last game, coming up with two clutch steals in the paint.

Adekoya’s impact on winning was on full display last weekend when the Riders took on the Sheffield Sharks. He earned the Premier Logistics’ player of the game despite not scoring, ending with a +/- of 24.

Adekoya’s defence on Hassan in this one may once again prove the difference between the Riders and their opponents.

The game will be live-streamed on the British Basketball Youtube channel, tipping off at 3 pm.