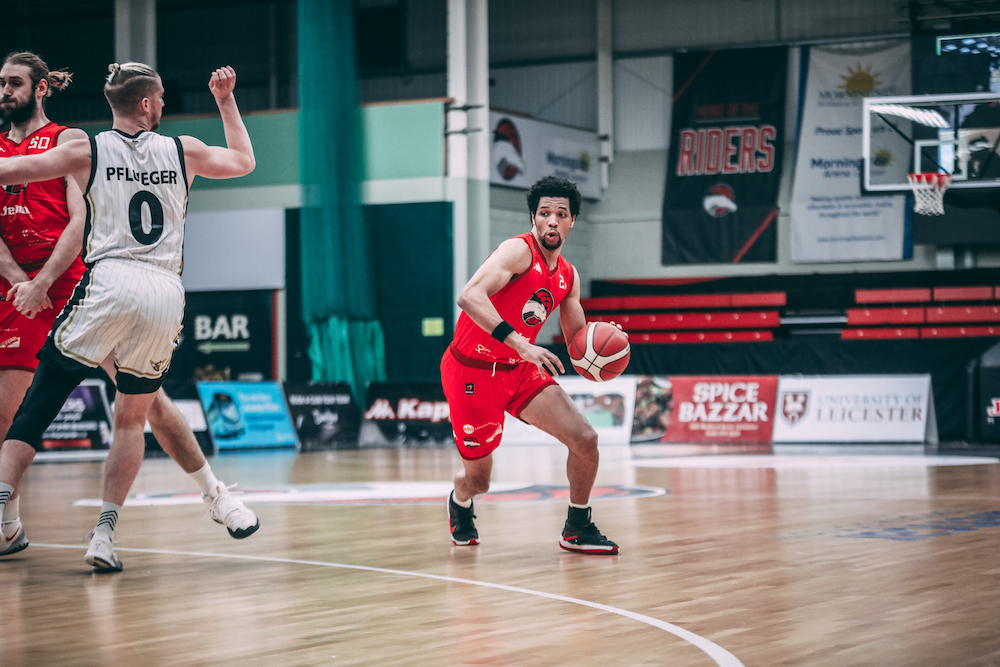 The Riders continued their fine form in the BBL Championship with a 83-75 win against the second placed Newcastle Eagles. In a balanced team performance, Leicester had contributions from all over the court, with four players scoring in double-digits. Darien Nelson-Henry continued his hot form, with 20 points on his birthday.

The birthday boy was at his best, leading the team in points for the second straight game. He dominated the paint, recording a double-double with 20 points and 11 rebounds, going 10-15 from the floor. The big-man came up big in the clutch with six points down the stretch to seal the victory for Leicester.

The game was fast-paced, with both teams keen to get out and run the fast break. This was made possible through turnovers from both sides, as the defensive intensity matched the intensity of the fixture. Geno Crandall was especially active early, with two steals in the first quarter alone. The quickness of the game allowed him to shine on the fast break, kicking the ball ahead for open looks before the Eagles defence could set. Crandall stuffed the stat-sheet, performing in all areas of the game. He had 16 points, seven rebounds and seven assists, along with three steals.

The Eagles made the game competitive until late, pushing the Riders all the way led by two-time BBL MVP Rahmon Fletcher. He led the game with his 25 points and had eight assists to go with them, running the offence to get his teammates open looks.

The Riders, in typical fashion, started quickly, jumping out to a 13-6 lead, finding their offensive rhythm feeding Nelson-Henry down low. They had success in the paint, relentlessly attacking the rim for easy points. Despite the good start, the Eagles hung in the game by getting to the free-throw line often, eventually taking the lead 20-18 by the end of the first quarter.

As has become a Rider tradition this season, William Lee came up with an emphatic play to get the Riders bench on their feet: a huge putback dunk midway through the second quarter. But the play of the game came from Crandall later in the quarter, who opened his full bag of tricks for a highlight play. He went between his legs to freeze his defender, before throwing a behind the back, no-look pass to the cutting Nelson-Henry for the easy two. The second quarter went back and forth, with five lead changes, and the teams went into the half all square at 39-39.

The second half followed a similar trend, with neither team able to establish a clear lead. However, checking into the game midway through the final quarter, Crandall and Nelson-Henry took the reigns for the Riders with 14 fourth-quarter points between them. The Eagles had no answer for their key buckets down the stretch, which secured the win for Leicester.

The Riders win takes their record to 12-1, further stretching their lead at the top of the BBL Championship. They head to Manchester on Sunday hoping to continue their nine-game league winning streak.