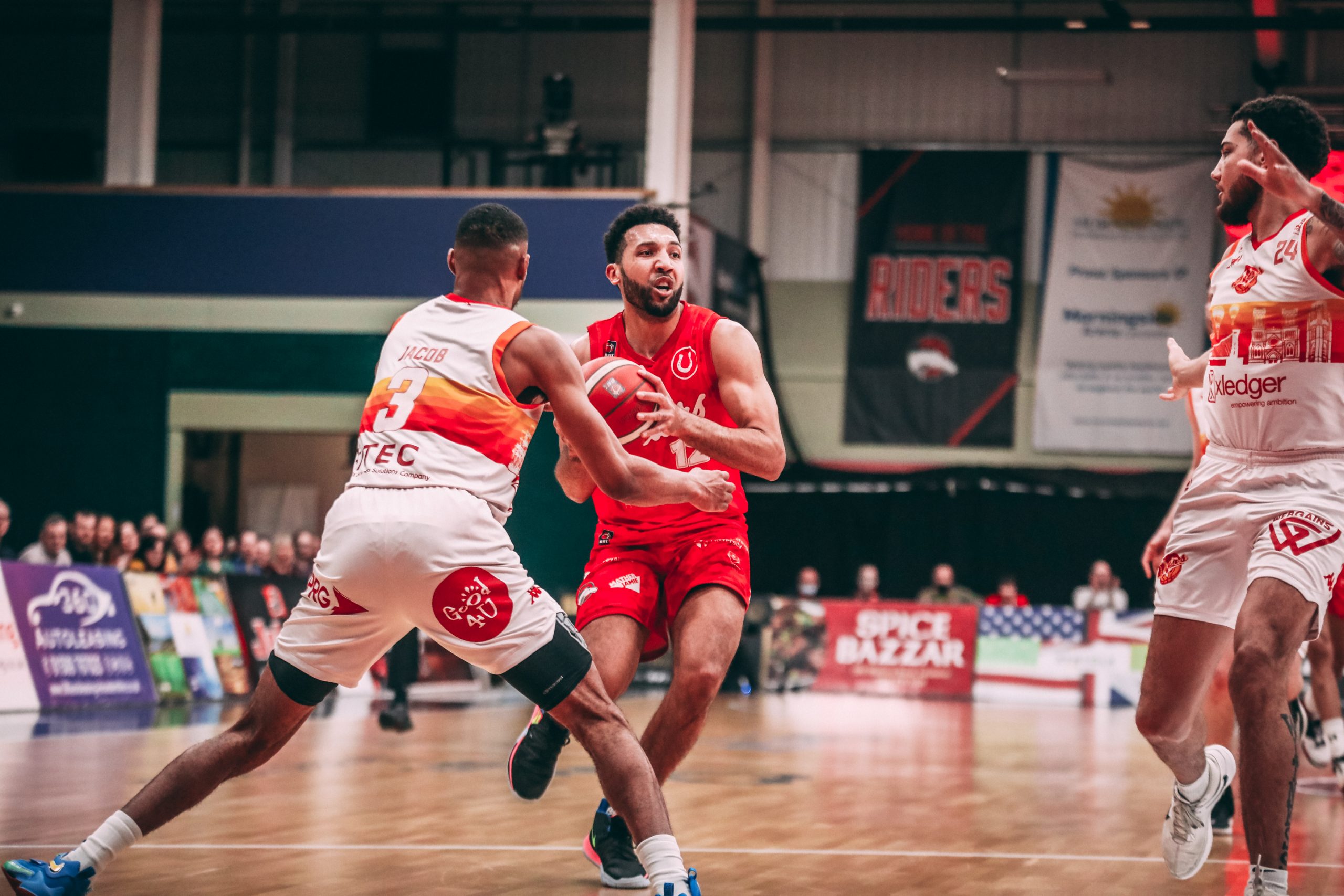 Riders edge Flyers to open the weekend with a win

The Riders won a hard-fought battle against the Bristol Flyers, finishing 87-82 victors. Patrick Whelan led the team with 23 points, going 5-10 from the field and 11-11 from the free-throw line.

With 11 seconds left and up three, Geno Crandall sealed the win for the Riders with a clutch block on Trejon Jacob. Leicester blocked nine shots on the game, this one the most pivotal as they improve to 18-2.

In the absence of Flyers’ star Marcus Evans, who served a one-game suspension in this one, Trejon Jacob stepped up in the Bristol backcourt. He had 17 points and six assists in his team’s efforts, hitting two big threes in the clutch to keep it close.

Three more wins will secure the Riders’ second-straight BBL Championship, as they sit 12 points clear atop the table. They fought back against a hot Flyers start to take a big step towards the silverware.

It was Josh Rogers who led them out the gate, the sharpshooter put up eight points in three minutes to give Bristol an early edge.

With the Riders in a 14-5 hole in the opening five minutes, the captain, Darien Nelson-Henry, stepped up to give his side a jolt of momentum. He scored four quick points after a Leicester timeout to bring the game to within five.

But despite the big man’s efforts, the Flyers’ offence remained in a rhythm through the rest of the first. They shot 65% in the quarter, to take a 32-21 lead into the second.

Leicester fell back on their league-leading defence to get back into the game. Steals on three straight possessions got the home crowd on their feet, as a Marc Loving off-balance three cut the deficit to single digits.

The Riders continued their charge back into the game, locking down on defence to go on a 12-0 run. Patrick Whelan’s free-throws gave Leicester their first lead since early in the first, after Loving scored eight on the Riders’ run to give them a 46-43 halftime lead.

The teams to start the second half, as the score stayed locked within a possession for the entirety of the third. Mo Walker scored four to close out the period, while the Flyers’ Mike Miller dropped eight before going down with a leg injury.

Zach Simmons closed the third with a pair of three throws, to send the game into the final quarter with the score 64-61 to the visitors.

The Riders took the game by the horns in the fourth, going on an 8-0 run to start the quarter and take the first two-possession lead of the second half. Running the fastbreak, Jubril Adekoya sent the crowd into a frenzy by finishing hard at the hoop through contact, making an and-one play.

The Flyers came back, making three contested threes to take a narrow lead with two minutes left. It was time for the MVP to take the reigns, as Crandall drained a running three-pointer early in the shot clock to take an 81-79 lead.

With 11 seconds left and the score 83-82 to Leicester, Nelson-Henry went to the line and made both, coming up clutch for his team. With the game on the line, Crandall came up with a huge block, and Jackson knocked down two more free throws to seal a hard-earned Riders win.

“We had a great reaction when things weren’t going our way. It lit a fire under the team and that’s going to be a key for us going into the playoffs,” said Whelan post-game.

“We have one hand on the trophy, but we’re going to take it game by game as we have all season. We’ll go to Surrey tomorrow and try and get the dub.”