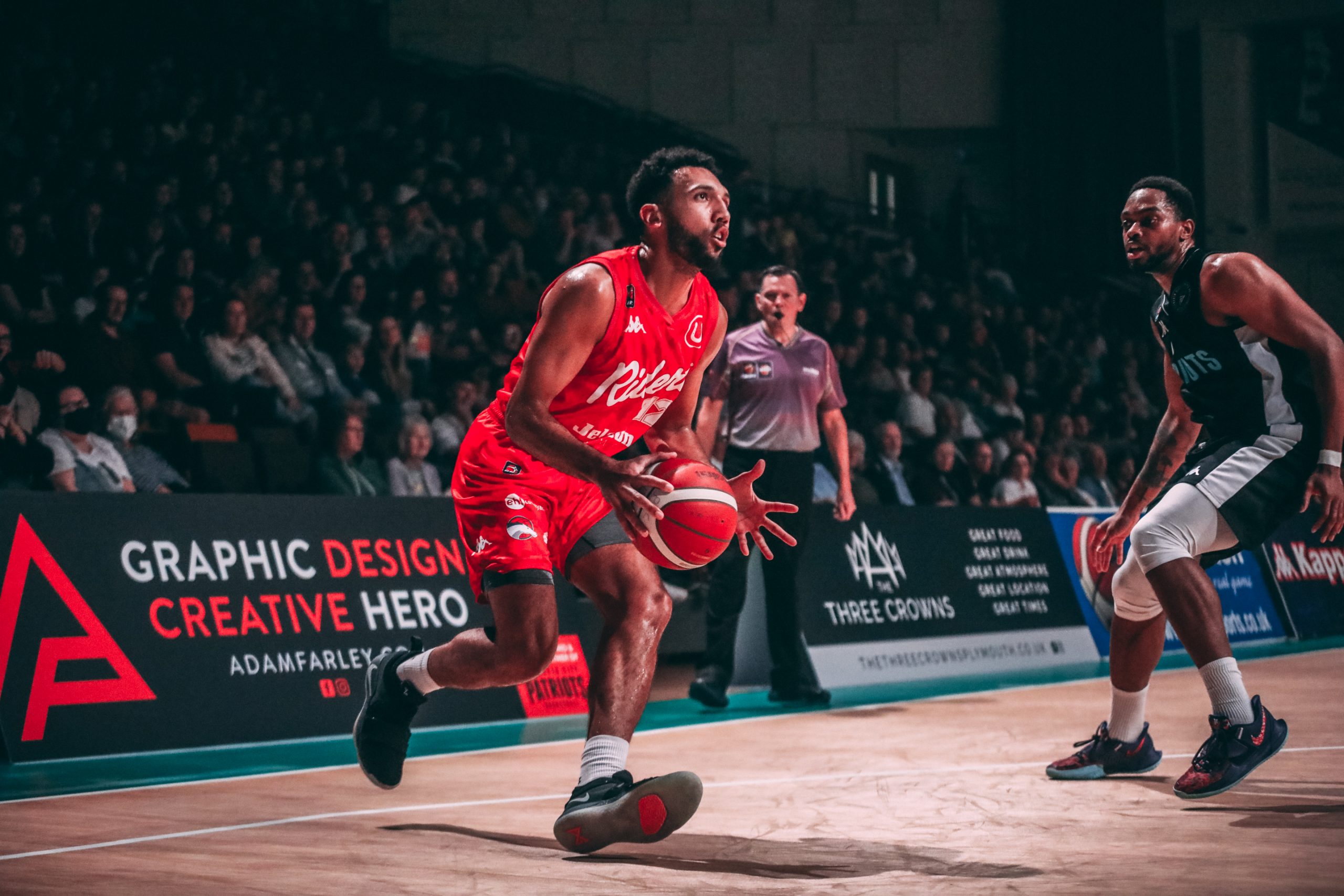 The Riders dominated in Plymouth, leading the Patriots wire to wire to win 109-58. Zack Jackson’s hot form continued from his previous fixture, leading the team with 25 points and six rebounds, shooting a blistering 6/7 from three.

For the second game running, dynamic duo Jackson and Geno Crandall topped the Riders box score. Crandall had 17 points, eight assists, five rebounds and three steals in just three-quarters of the blowout. The reigning MVP produced the play of the game in the third, driving to the rim among three defenders before finishing through contact, throwing the ball up high off-balance to lay in a circus shot for a three-point play.

The game marked the return of BBL basketball to the Plymouth Pavillions, as the home fans got their first glimpse of their Plymouth City Patriots. Despite the heavy defeat, Patriots fans were in full voice throughout, appreciating the effort from their team. Denzel Ubairo provided reason to cheer, the 6’3” guard scoring 17 points in the first half and 22 in the game.

Injuries played a significant role in the Patriots struggles, with starting point guard Elvisi Dusha and starting center Kingsley Okoroh both absent. Plymouth came unstuck against the stifling Riders defence, shooting 31% from the field and 23% from three. Leicester was dominant inside, blocking five shots, including two from 6’9” forward Marc Loving.

The game was all but won in the first half, the Riders bursting out the gate to enter the locker rooms up 55-30. In their fifth game of the season, Leicester’s offence clicked, dishing out a monumental 33 team assists. All five Riders starters scored in double digits, and every Leicester player scored at least five in an emphatic scoring night.

The visitors set the tone with a commanding opening quarter, establishing a 26-15 lead. They exuded confidence from the tip, encapsulated by Crandall’s outrageous deep three from several feet behind the line hitting nothing but net midway through the period. Crandall scored 12 in the first quarter, leading his team to a red hot start.

Winning the second quarter 29-15, the Riders stretched their lead to 25 by halftime to put the game beyond much doubt. They assisted on all 17 of their field goals through the first two periods, shooting 51% from the floor in a fluid offence.

Leicester kept their foot on the pedal, displaying professionalism and ruthlessness to kill the game. With points difference a potential factor at the end of the group stage, the Riders ran up the score to put themselves in a secure position in the table. They won the third quarter by 14, taking a 39 point lead into the final period.

A 28-16 fourth quarter capped off a display of dominance, the Riders hitting six threes in the period to finish the game in style. Young Charnwood star Victor Ndoukou gained valuable on-court minutes, the 18-year-old scoring five in the quarter in just his fourth year playing basketball. The Riders finished the game up 51, their tenth biggest win in their BBL history and their biggest against Plymouth.

The Riders head to Surrey on Friday, to take on the Scorchers in the final game of their road stint. They hope to improve to 4-1 in their BBL Cup group to place themselves in a solid position to qualify for the knockout stages.