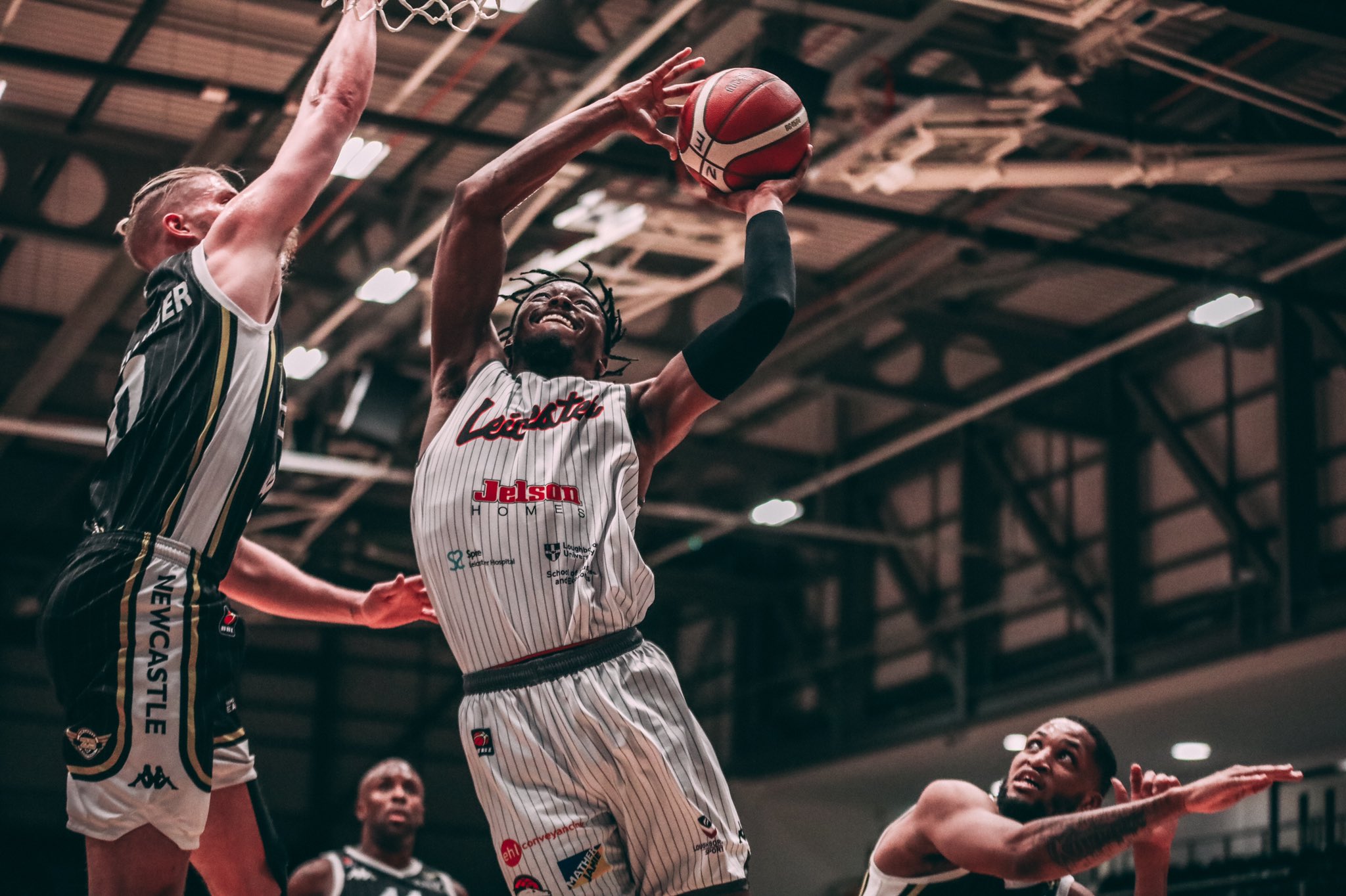 The top team in the British basketball League take on the league’s most historic. Travelling to the Vertu Motors Arena in Newcastle on Friday for a 7:30pm tip, the Leicester Riders look to secure BBL silverware in the final regular season clash with their oldest rivals Newcastle Eagles.

The Riders battled last Saturday to capture a gruelling overtime victory. Defeating the 2nd placed Plymouth Raiders 93-85, they snapped the visiting side’s eight game winning streak and knocked them out of the title race. This win put the Riders one step closer to securing the BBL Championship trophy and the number one seed, leading the table by 12 points with only the London Lions within reach. A win this Friday would seal the deal and crown the Riders, but the Eagles would love to play spoiler after being knocked out of the running in their Friday night game last week.

The Newcastle Eagles find themselves 4th in the BBL table, their wings clipped as they suffered consecutive losses that knocked them out of the title hunt. This will only fuel the Eagles for the upcoming match however, as they can spite their old rival and let off some steam in the process. Both sides play the team basketball that has led to success, the Eagles leading the league in assists per game with 24.1, and the Riders notching 21. And with both sides positioned one and two in field goal percentage (the Riders stealing the top spot by one with 48%) the Vertu Motors Arena is in store for an exciting affair.

This contest may well be a battle between BBL Most Valuable Player candidates. Leicester’s candidate Geno Crandall had a heroic game against the Raiders Saturday. Battling through a hindered wrist, Crandall put on a performance recognised by fans as incredible, who voted him the player of the game. Entering the action from the bench, Crandall played over 30 minutes and dropped a points-assists double-double. He finished with 15 points, 10 assists, 7 rebounds and 4 steals, and additionally led both sides along side Darien Nelson-Henry with a +12 plus/minus. Crandall’s dazzling handle, crafty shot making, and court vision are needed weapons for the Riders, and his proficient rebounding from the guard spot is also a luxury his team can ill afford to go without. Crandall punished the Eagles with an efficient double-double in their last meeting, and the Riders will hope he can grit his teeth and do it again to push them over the BBL Championship hump.

Newcastle can answer with their own candidate, and former two-time BBL MVP Rahmon Fletcher. Despite the heart-breaking loss in the Eagles last outing, Fletcher put up a monster performance. Playing every second, and shooting an absurd 15-22 from the field, Fletcher poured in 38 points, and tallied 10 assists for his seemingly weekly points-assists double-double. Fletcher is a true magician at the point guard position. He leads the league in both points (18.7) and assists (9.5) per game, so is someone the Riders must slow down. In their last meeting the Riders did an admirable job doing just this as, despite throwing down his familiar double-double, he was limited to 11 points. Fletcher will be looking for a different story this time round, the Eagles captain pushing on from his Friday night explosion.

The Riders and Eagles last met on the 12th of March 2021 at the Vertu Motors Arena. Both teams had a pair of players post double-doubles, but the Riders proved to be the more efficient side, securing a 73-99 victory. The affair was a battle between both ones to watch, Geno Crandall getting the better of Rahmon Fletcher on the night, so another exciting clash between the two is sure to be on the cards.

Riders fans will be able to watch the game live on Sky Sports Action and for free on the Sky Sports Youtube Channel from 7pm. The game will also be steamed live on BBL Player.