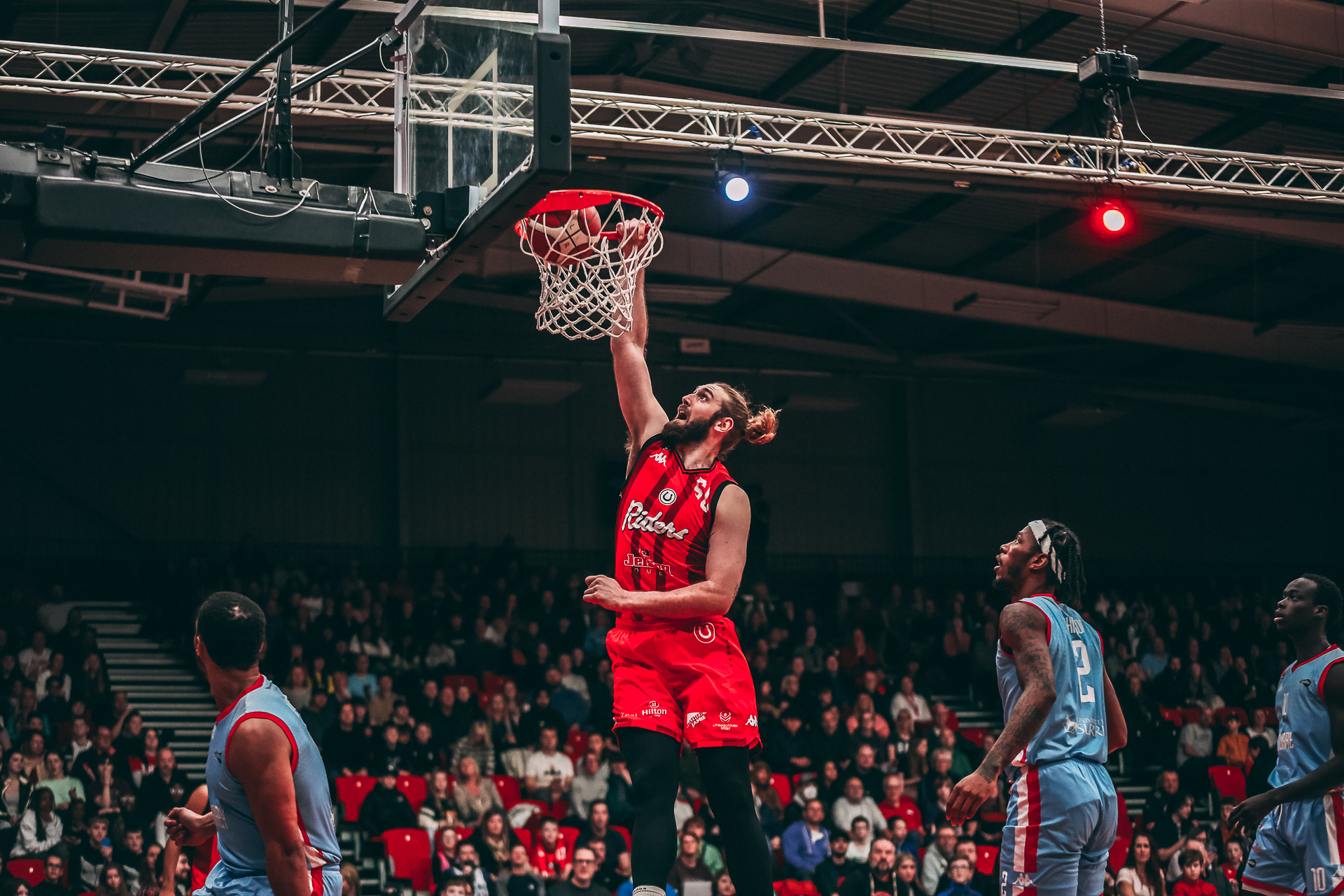 The Riders saw out a 77-72 nailbiter against Surrey Scorchers, improving their record to 12-5.

Marc Loving led the way with 22 points, scoring nine in the fourth to seal a clutch win. His teammate on the wing, Zach Jackson, closely followed with 20 points.

Jackson turned the tide in the third quarter with six points and two steals, earning the Riders a lead they didn’t surrender.

The win makes it 37 undefeated against Surrey, the longest streak against an opponent in the BBL. The Riders’ defence held the Scorchers to 16% from deep, and 44% from the field.

The Scorchers have now lost eight games within 10 points this season. They proved they could hang with the league’s best, but were unable to get over the hump in tonight’s fixture.

Their young star Padiet Wang finished up with 24 points, followed by Quincy Taylor’s 18.

The Riders started hot, jumping out to a 7-3 lead after four quick points from Darien Nelson-Henry.

Surrey hit back via Wang, who scored five in response to take the lead for his side and set the stage for a closely fought first quarter. Wang scored 12 in the first quarter, exploding the rim with his elite athleticism.

Whelan got himself going midway through the period, hitting a three for his first points of the evening. His triple snatched momentum for the Riders, who built a seven-point lead.

Aaron Menzies put an exclamation point on the run, slamming it down one-handed at the rim.

The Scorchers found form in the second, which they started on a 12-2 run. Andrew Lawrence’s back-to-back midrange jumpers took the lead, which Surrey stretched to nine five minutes in.

The Riders halted the visitor’s run, cutting it to six by halftime led by six points from Kimbal Mackenzie.

Jackson got the second half underway with five points in two minutes, hitting a three with Taylor in his grill. He took the challenge of guarding Wang, who scored 18 in the first half. The Omaha graduate quickly came up with two steals, leading the charge on both ends.

Conner Washington’s three tied it up at 53 with two minutes remaining in the period. Whelan then took the lead with a pair of free throws, putting the Riders up going into the fourth.

Loving got the final period underway with four points, cooking defenders with his silky dribble. Jackson followed up his teammate with back-to-back tough finishes at the rim, earning the Riders a seven-point lead.

Loving took the fourth quarter over, scoring nine points in five minutes, concluded by a three from the corner.

The Scorchers fought back, as Wang strung together some buckets to take momentum back for his team. Surrey made it a three-point game with two and a half minutes remaining after Wang’s layup.

However, the Riders saw the game out in the clutch, as Nelson-Henry found Jackson on back-to-back plays to seal an important win.

The Riders are back on the road for their next BBL action. They head to Bristol to take on the Flyers, hoping to build on tonight’s win.