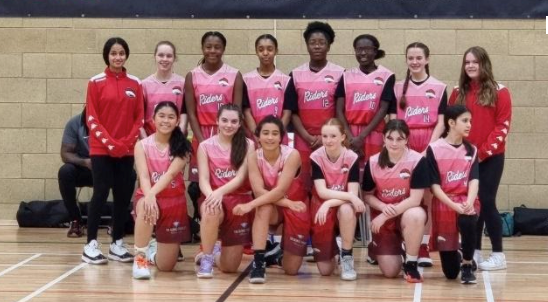 Leicester Riders U14 Girls are flying high in their league this season. Having finally been able to enter into their first competitive season, all their hard work and enthusiasm over the last few years is truly reaping its rewards. Sunday saw them take on Milton Keynes Basketball Club who are also new to Basketball England National League and were also 4 & 0 for the season so far.

The top of the league clash provided a scintillating first quarter where the lead swapped hands numerous times, but ended 18 -14 to the Riders. Coach Barwell kept his calm and rotated his players which made the difference as they went in 38 – 22 at the half. The game was competitive all the way through but the strength in depth of Riders squad proved to be a decisive factor with Milton Keynes tiring with only having eight players.

Coach Barwell had this to say:
“Today’s game felt like the culmination of three years of hard work for a group who have had their first season cancelled not once but twice. When we set up the girls’ programme in 2019, the dream was just to one day be able to compete in the NBL and the results so far in our debut season are beyond
anything that we could have imagined.

“I’m lucky to have a squad with such depth of talent as we’ve already had 18 different girls compete for us in the league this year. You could see that strength in depth was the key difference betweenthe teams today and I’m extremely proud of the bench for coming in and executing just as well as
our starters did. Every game, those players not selected have still been travelling to support their teammates and the support of parents and family members has been incredible too. I feel really fortunate to coach this team and we’ll be working hard to continue the great progress that we’ve made so far.“